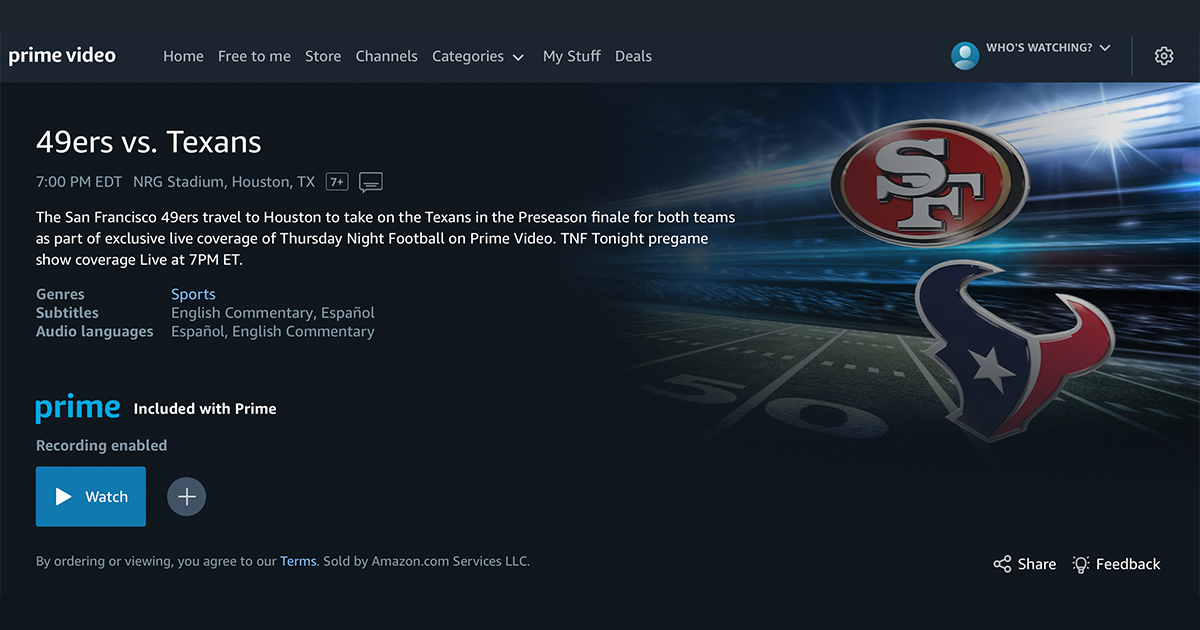 Amazon’s pre-season NFL game looked ok on some devices for me, but had some major issues on others. The TNF page wouldn’t load at all on iPad, giving me a, “Problem Occurred. Please try again in a few minutes” error (screenshot). I could navigate to the browse page, but the NFL game isn’t listed anywhere. There is no way to get to it and there is no “sports” section at the top. Some of the other tabs at the top are also reporting “problem occurred” errors, which is also the same message I got when I did a search on “NFL football”.

Around 40 minutes into the game, Amazon support told me there were aware of a “technical issue” involving “some specific issues with prime video streaming.” Not sure what exactly that means and they didn’t have more details. On a 55″ TV and up, the video stutters with fast movement and at times, is fuzzy up close. To my eyes, it looks like the bitrate isn’t high enough. Amazon’s support page suggests consumers only need 5Mbps to get the HD stream but I don’t know what their bitrate ladders are for this specific stream. The video quality looks much better on smaller screens.

On the iPhone, the stream worked well for me with about 1 a second startup time on WiFi and just slightly longer when on 4G. On desktop, (tested 10x), startup times averaged 9 seconds. There are some major issues however with audio syncing across my multiple Fire TV Sticks with other users reporting the same problem. The stream is not synced between devices, with as much as a 15 second delay between the Fire TV Stick, iPhone and desktop. This is odd since Amazon purchased the Sye tech from NetInsight to reduce end-to-end latency and sync video across multiple channels. With regards to advertising, all ad triggering for me has worked perfectly every time and for every break.

Some comments from uses on Twitter seeing similar issues with video quality and audio syncing:

To be clear, I have no way to know what percentage of viewers had problems like I did or what percentage had no problems. We also don’t know how large the audience was, the platforms and devices they watched the game on and how much viewing was on small screens versus TVs. This game was basically a live “rehearsal” for Amazon and I would expect them to improve upon the experience for their next game on September 15th. It’s possible they will make some changes to their bitrate ladders and other settings, but the audio being out of sync so badly and the bitrate seemingly looking too low are big issues that need to be addressed when the NFL season kicks off next month. Streaming is not a perfect technology and never will be. That’s not how the technology works. As a broadcast medium, it will never deliver the same experience to 100% of viewers. That’s just reality.