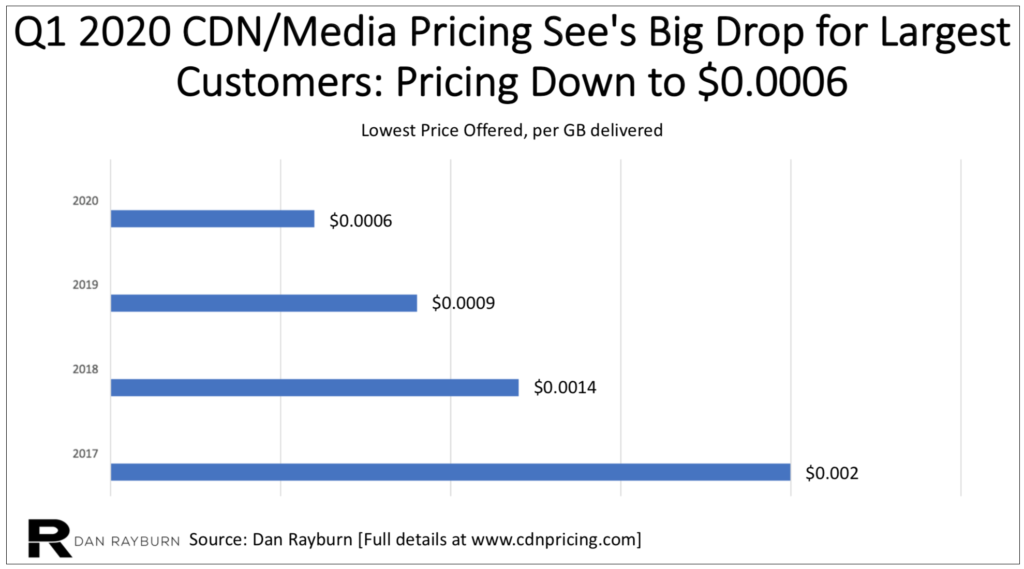 I just finished surveying over 600 customers that use third-party CDNs for the delivery of video and software downloads and the data shows there’s been a big decline in Q1 pricing, year-over-year, for the largest customers. Some of the biggest OTT and gaming companies are now getting pricing as low as $0.0006 per GB delivered. (Contact me if you are interested in purchasing the data) While the list of companies that can get pricing that low is very short, they are also the coustomers that tend to generate the largest portion of the overall total growth of the video and software download traffic in the industry. In the survey data I saw only one customer getting $0.0006 per GB, but I saw a couple brand names we all know getting $0.0007 per GB delivered. A year ago I reported that some of the lowest pricing around was $0.001, and I saw AWS starting to allow $0.0009 on select deals, but pricing has now fallen even below that.

This decline in pricing for some of the largest customers in the market is also one of the reasons why some CDNs pass on taking on video and software traffic at these price points. The margins are simply too slim, and outside of CenturyLink, none of the other major third-party CDN providers own their entire network, where theoretically their costs should be lower. I won’t mention CDNs by name, but I know that some third-party CDNs internal cost per GB delivered is in the $0.0007 range. So taking on customers at that price point means they aren’t making any money on the deal, unless they are able to up-sell the customer on other services, which most times they can’t.

As I wrote two years ago, the current Infrastructure strategy to support OTT services isn’t economically sustainable for third-party CDNs. They can only make up for the low pricing with volume, which is hard to get since all large customers use a multi-CDN strategy or sell other services at a higher margin, which even if sold, are nowhere near the volume of video and software download traffic. And for those that think the recent pandemic is going to produce a large growth in sustained traffic, overall traffic growth specific to video on third-party CDN networks was only up between 12%-20% in March, when compared to February.

Even for customers not doing insane amounts of volume, a mid-sized customer can now get pricing starting at around $0.007 per GB delivered, with a commit of something north of 20PB of traffic a month. Get into the 40PB a month range, and pricing is around $0.005 per GB delivered, depending on the CDN. If you’re a content owner reading this, that doesn’t necessarily mean that’s the rate you should be paying if you have this level of volume. There are a lot of variables that determine the final quoted price and if you need help in your RFP process, reach out to me at any time. I’ll help you free of charge and I take NO kickback from any CDN.

When you add in the fact that there is currently a large wave of new CDN DIY deployments taking place, the market for third-party CDNs is going to get very interesting in the next 18 months. And for those, like Apple, who already built out their own CDN, they are now branching out to work with even smaller ISPs with a minimum requirement of only 25 Gb/s of peak traffic across all Apple services. I am not predicting doom and gloom for third-party CDNs that deliver a lot of low-margin bits, but change is coming to the CDN landscape in the next 18 months in the wave of new DIY deployments, new competitors with scale, and a shift in traffic commitments across multi-CDN deployments. Pricing will probably drop to $0.00045 for the largest customers, in the next 12-months.