CDNs Akamai, Limelight Networks and Level 3 Are In The Mix For iOS8 Downloads

While Apple is delivering the majority of iOS 8 downloads from their own CDN, third-party content delivery providers Akamai, Limelight Networks and Level 3 are getting some iOS 8 traffic. Based on traceroutes and other data from Cedexis, DeepField, DYN and internal data from ISPs, it’s clear Apple is using a multi-CDN strategy especially in specific regions outside North America, particularly with smaller ISPs. Last mile providers are seeing a huge demand for iOS 8, with traffic inside some IPS being  50% higher than normal. Combined, others saw traffic jump from 200Gbps, to a peak of 3Tbps. Apple’s new CDN has been impressive, both by the volume it has handled and also its performance.

Most of the larger ISPs in the U.S. have direct interconnects with Apple and are using Apple’s CDN. Apple put in place a lot of interconnects over the last year, including ones that are paid, and adopted a fairly broad direct peering strategy, especially in North America. For Tier-3 ISP’s, Apple looks to have split the traffic between Apple transit, Akamai and Limelight’s CDN. Akamai and Limelight appear to have gotten more CDN traffic than Level 3, but Level 3 should be the biggest winner in the iOS 8 download as Apple buys a huge amount of IP and other network related infrastructure from them.

It’s impossible to split out the percentage of traffic that is going to third-party CDNs, and Apple will change it based on availability, but looking on the data from multiple services, it’s clear Apple is delivering the majority of the iOS 8 traffic via their own CDN. Again, I can’t say an exact percentage, but it’s safe to say they are delivering the largest share. You can see when traffic started to hit some of the third-party CDNs, in certain regions like Finland, when the iOS 8 download was released. The first chart below from Cedexis shows the latency in Limelight’s network increasing, at the same times iOS 8 was made available for download. The key performance metric for downloads is availability, not latency but it’s a good indication showing which CDNs are being used in specific regions.

The second chart below from DYN, shows even more details on how the CDNs are connected, allowing you to examine each of the nodes and how they route traffic through the Internet. That chart is data from Frankfurt Germany giving a very interesting view, showing when Apple connected to their own CDN versus when they were connected to those of Limelight or Akamai. 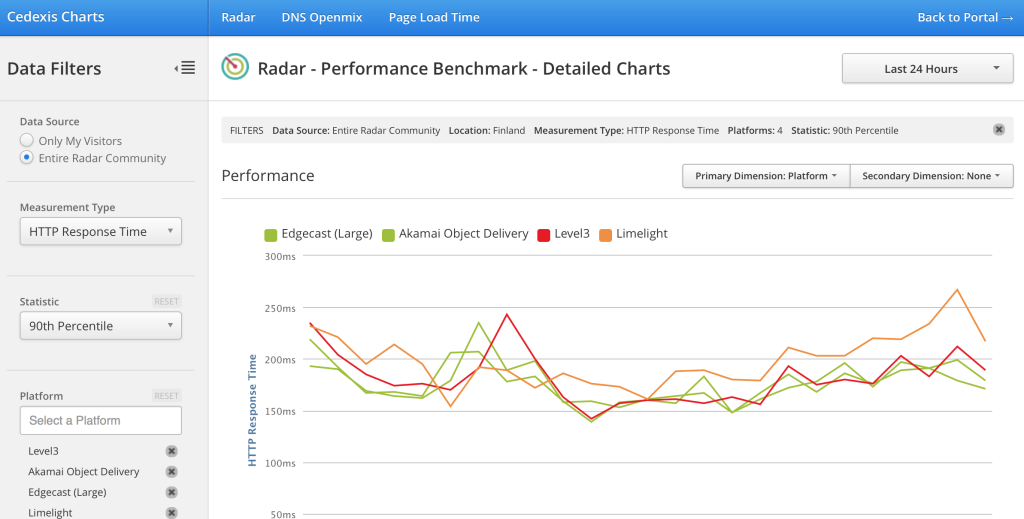 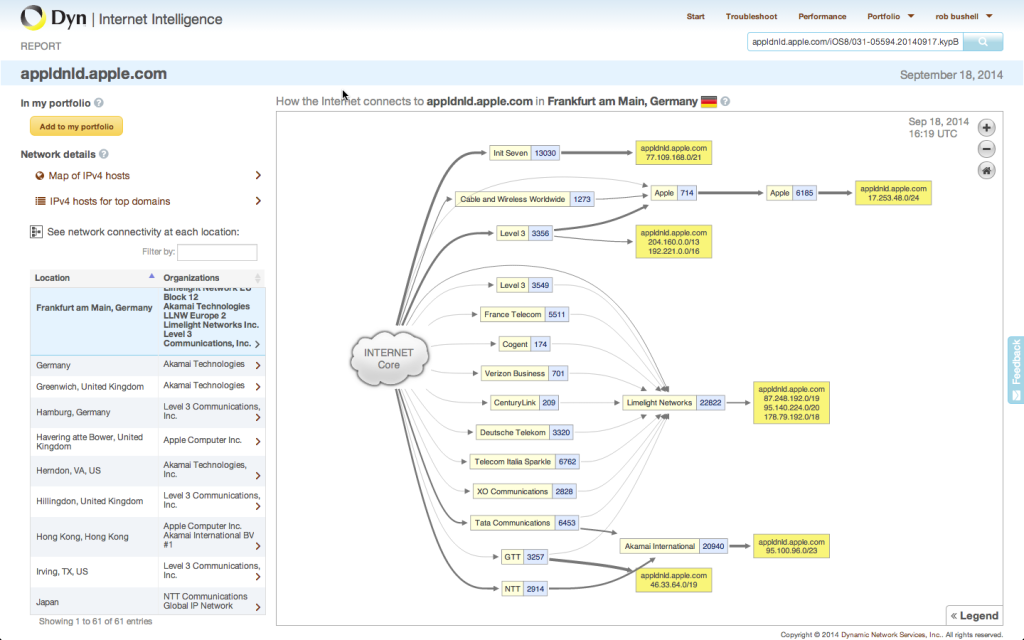