For the past few days, transparent caching provider PeerApp has been monitoring apple.com activity for almost 70 of their telco and university customers across the globe. [Updated 9/21: PeerApp says that the 70 customers do not include their Tier 1 customers.] Not surprisingly, around 1pm ET on Wednesday after iOS 9 was released, combined traffic from iOS 9 downloads spiked to almost 13Tbps. Nearly 80% (over 10Tbps) of this traffic is being delivered through PeerApp’s cache, avoiding congesting of the operator and University network. Looking at individual systems, PeerApp said they are seeing speed improvements on the order to 10-20x; meaning customers served by their caches are getting the apple.com traffic 10-20x faster from cache. One University in particular is experiencing up to 100x speed improvement in downloads. 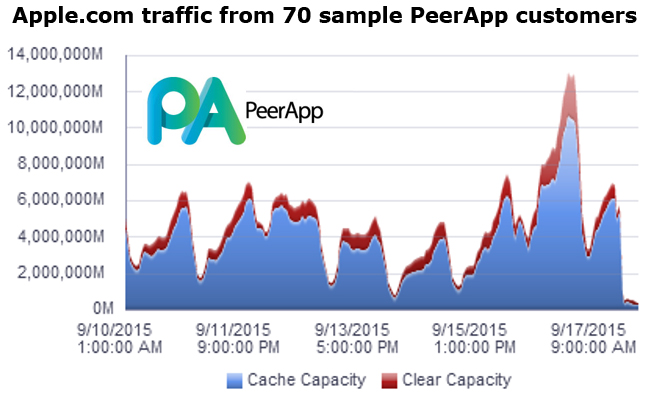 In conversations I’ve had with some ISPs in the U.S., iOS 9 downloads have been accounting for anywhere between 8%-15% of traffic inside their network. Since this isn’t the first time ISPs have had to deal with iOS downloads most are well setup to handle the spike and use caches to deal with the extra traffic. I don’t know the breakdown on the percentage of downloads Apple is handing via their own CDN, but like iOS 8, they are using a combination of their own CDN and third-party CDN providers. Downloads appear to be going smoothly for most consumers, with very few complaints and amongst the 12 devices I personally upgraded to iOS 9, the download and install process was quick and painless.