Data is slowly starting to come in on how ISPs are handling the Windows 10 update and overall, it seems most ISPs are doing well, with a few experiencing some QoE issues. Third-party data shows that the CDNs Microsoft is using for a large percentage of downloads have so far, not experienced any performance problems. Based on numbers I have been given, total traffic amongst all CDNs delivering the update looks to have peaked at around 10Tb/s, with more traffic on Wednesday than Thursday. It should be noted that Microsoft is still stating that Windows 10 is in a limited release, so this is only the start.

The below chart from a major ISP in the U.S. that I will not name shows Windows 10 downloads accounting for just over 10% of all the traffic inside their network on Wednesday. 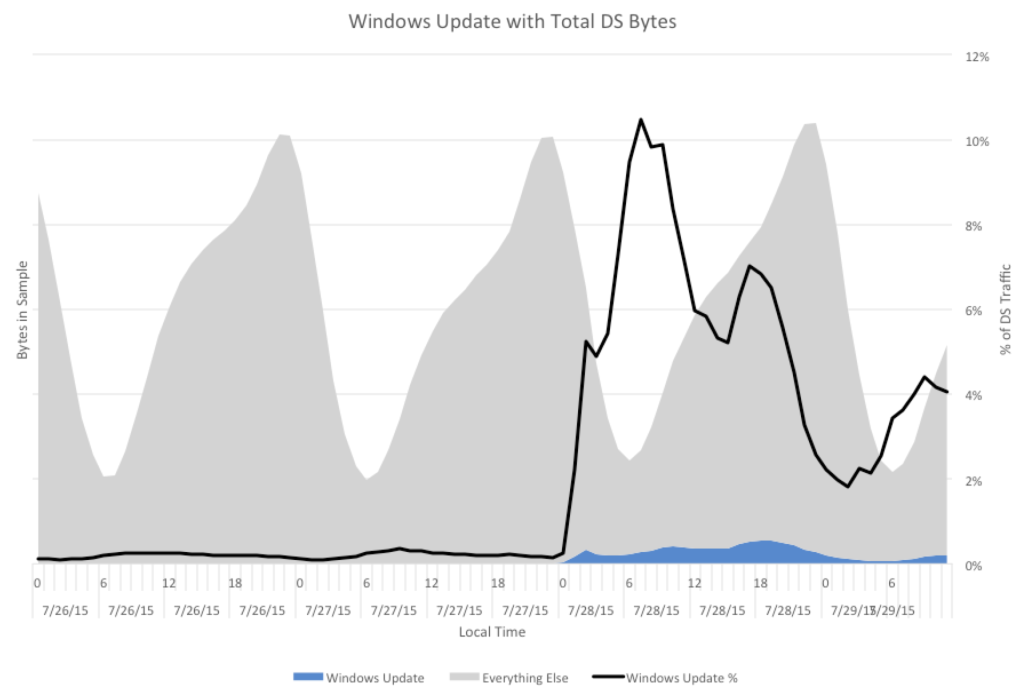 Other ISPs outside the U.S. I have spoken to have said Windows 10 downloads are accounting for 20% of their overall traffic, which is the peak number I have heard. The size of the ISP and the number of subs they have are some of the biggest determining factors when it comes to the numbers, so many will report variations from one another. Procera Networks has just put up a blog post, with charts, showing one European ISP seeing a spike of 30Gb/s. Sandvine has a blog post from today as well saying that Windows 10 traffic accounted for “between 6-8% of traffic during peak”, for a North American ISP they monitored.

It’s clear that ISPs in the U.S. have fared well, with Cox being the only one that I have seen so far, that’s had some Latency issues.

Microsoft’s approach of staging Windows 10 downloads in a tiered model is working well and was a smart way to go about it. They still have a long way to go, as updates still have to roll out for corporate versions of Windows 7 and Windows 8 and plenty of users won’t update in the first 24 hours, so a lot more traffic is coming. But the way Microsoft is metering the delivery seems to have provided most with a good download experience. I have seen some users complaining their download is taking four, or even six hours to finish, but it does not seem to be the norm. Overall, Windows 10 will result in the largest number of bits being delivered on the web, for a single event, especially with the Windows 10 download file size being 3x larger than the iOS 8 update. Follow me on Twitter where I will post more numbers and charts as I get them.