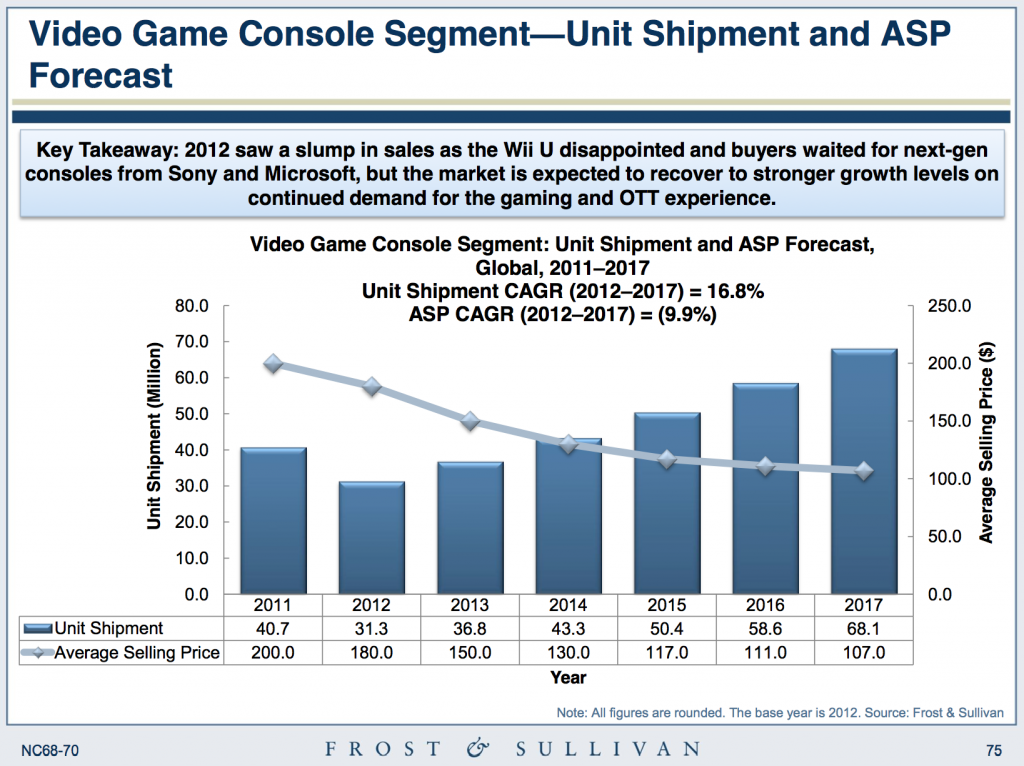 We’ve just released our latest Frost & Sullivan report on the size of the Consumer Video Devices Market, which details the market drivers, restraints to market growth, product and pricing trends, competitive landscape, and market forecasts and trend analysis broken out by region of the world for the next five years. Our report details why we believe that the video game console market will grow at a CAGR of 16.8% over the next five years and that more than 35M video game consoles are expected to be sold globally this year.

2012 saw a slump in sales as the Wii U disappointed and buyers waited for next-gen consoles from Sony and Microsoft, but the market is expected to recover to stronger growth levels on continued demand for the gaming and OTT experience. Gaming revenues from the sales of games, accessories and related goods have shown consistent declines over the last two years under the combined onslaught of rise in social and cloud gaming, and diminished consumer spending in response to economic certainty. It is widely believed that these symptoms portend a dire future for the console segment, however Frost & Sullivan does not believe this is the case.

Microsoft, Nintendo and Sony are all reinventing their current generation consoles in 2012-2013 with the goal to provide a multi-screen immersive gaming experience while also competing effectively on OTT services. As price margins on the hardware itself continue to fall, vendors are also devising complementary strategies to drive total revenue. As consoles are increasingly used for OTT video experience, support for a range of OTT apps – free, online video subscription and Pay TV companions – is increasingly critical.

Copies of the report are available to any customer who has a subscription to Frost’s Digital Media research service and anyone interested in getting a subscription can contact me for more details. Also, while many research analysts at other firms won’t talk to someone unless they are a customer of that firm, I have and always will talk to any company who is interested in getting more details on any aspect of the video, streaming and content ecosystem. You don’t have to be a customer of Frost & Sullivan for me to take your call and do a briefing with you, so call anytime.