While there have been a lot of reports put out on the total size of CDN market, they don't detail what percentage of the revenue comes from the delivery of video. As everyone knows, video is one of the fastest growing segments of the overall CDN industry, yet is also the most volatile when it comes to pricing and volume trends. In addition to my role at StreamingMedia.com, I'm also a Principal Analyst at Frost & Sullivan in their Digital Media Group and in 2008, we started breaking out the size of the market, specific to video.

I'm currently working on a follow up to our 2010 Frost & Sullivan CDN report which details the market drivers, restraints, market share, competitive analysis, and industry challenges specific to the video delivery industry. (contact me if you want to learn about how to get a copy of the report) Based on everything we have seen, we expect the market for video delivery services to generate over $1B of revenue by the end of 2013. (For a complete list of all the CDNs in the market, see www.cdnlist.com) 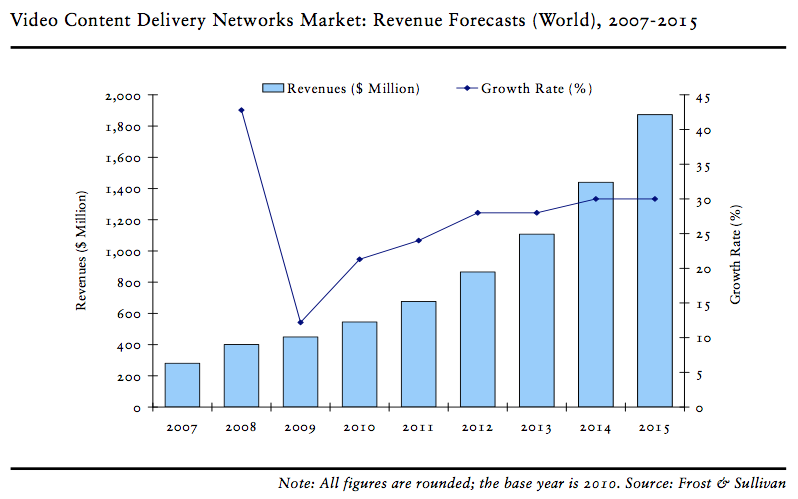 Video CDN market revenues equaled $545.5 million in 2010, reflecting a base year growth rate of 21.3%. 2009-2010 was a challenging period for the total CDN market. The global recession, especially the market slowdown in the United States, had a diminishing impact on several industries. However, Internet content consumption, especially that of video continued to grow, and therefore, the CDN market did not experience any negative impact, even though the growth rates were tempered as compared to historical trends between 2005 and 2008. The video CDN market is expected to grow at a compound annual growth rate of 28% from 2010 to 2015 to over $1.8 billion. The market saw about seven companies enter the market between 2008 and 2010, either through consolidation or independently, or as resellers, and increasingly with a focus on video.

With all the talk about over-the-top video and cord cutting, very few seem to mention just how many, or in this case how few, streaming enabled devices have actually been sold in the market. The good news is that we are starting to see some growth in the number of devices sold, but overall, the numbers of users are still small. The real catalyst to the growth of the CDN industry is not a broadband-enabled device, high-quality video or broadcast quality content, but rather the acceleration of all three. By themselves, any one of those trends is not enough to help the CDN market grow quickly, but combined, it will propel the size of the market much faster in 2013 and beyond.

While the unstoppable demand for online video has industry participants predicting explosive growth for the CDN market, Frost & Sullivan believes that it will largely be dependent on several factors such as market consolidation, technology trends, and the increasing role of telco companies in this market. Our 2010 report discusses this in detail and our 2011 CDN report should be out in Q1 of next year.