Roku officially took the wraps off their latest line of Roku devices today with three new models due out by the end of this month. StreamingMedia.com has the details on the specs and I'll be doing a hands-on review with the new units shortly as well as giving some away to readers of my blog. While I've always felt the Roku is the best box on the market for under $100, the addition of Angry Birds on the most expensive Roku model is not going to help Roku sell that many more boxes. Roku does not need games, it needs a better UI, faster software and more features in the hardware. [for a chart that compares all of the streaming media devices in the market check out www.StreamingMediaDevices.com]

In a story on USAToday.com an analyst is quoted as saying, "gaming through a Roku box will hurt established players like Microsoft and Sony," which shows just how out-of-touch some analysts are when it comes to streaming devices. Combined, Microsoft and Sony have sold more than 100M Xbox 360s and PS3s worldwide. Roku has sold less than 2M. Bringing Angry Birds and other games to the Roku is not going to "hurt" or impact Microsoft or Sony in any way. I've read more than a dozen articles today about the new Roku models and while many articles were quick to compare the Roku to products from Microsoft, Sony and Apple, not a single article mentioned sales numbers.

Roku's CEO is quoted as saying the, "Roku is the best-selling streaming player on the market because of its simplicity, breadth of content and value." How Roku defines "best selling" I don't know but I've asked the company for additional details. The latest number I heard from company executives was that Roku was aiming to have a total of 3M Roku boxes in the market by the end of this year. As much as I like my Roku, that's still a small number and that has to be kept in perspective.

Consumers are buying stand-alone streaming devices to stream, not to play games. Roku has not truly updated their UI in years. It's still slow, not as responsive as it should be and has poor navigation. While the Roku has the best lineup of content around, that is the saving grace for the device. What I don't like seeing is that Roku dropped support of dual-band wireless from their new top model, something the previous Roku had. Also, only Roku's most expenisve model at $99 has built in ethernet which is something that should be standard on all of their boxes and previous generation models that were cheaper than $99 use to have it.

While two of the three Roku boxes support 1080p streaming, Netflix still doesn't offer that level of quality on the Roku units. That means the only way to get 1080p streaming content to the Roku is to buy the most expensive model and use the USB port to load your own content. The probelm there is that one of the biggest things still lacking from the Roku is support for multiple video codecs. Boxee supports everything under the sun but Roku still only supports MP4/M4V, MOV, MKV and WMV. That does not give users a lot of choice when it comes to streaming their own content.

Roku really set the standard for the streaming device space when they launched in the market in May of 2008 and while they have been quick to refresh their lineup of boxes and add more content channels people actually want to watch, Roku is no longer the only option in the market. I would of liked to have seen some major upgrades to their UI, additional format support and more hardware functionality instead of gaming. All of these streaming device manufactures can't survive in the long run just selling boxes, which means the faster they move to a platform licensing model the better they will be positioned to lead in the market. And the better their UI works, the easier it is to navigate and find content and the higher quality stream it supports, the faster they are going to get to their ultimate goal which is to exit the hardware business. 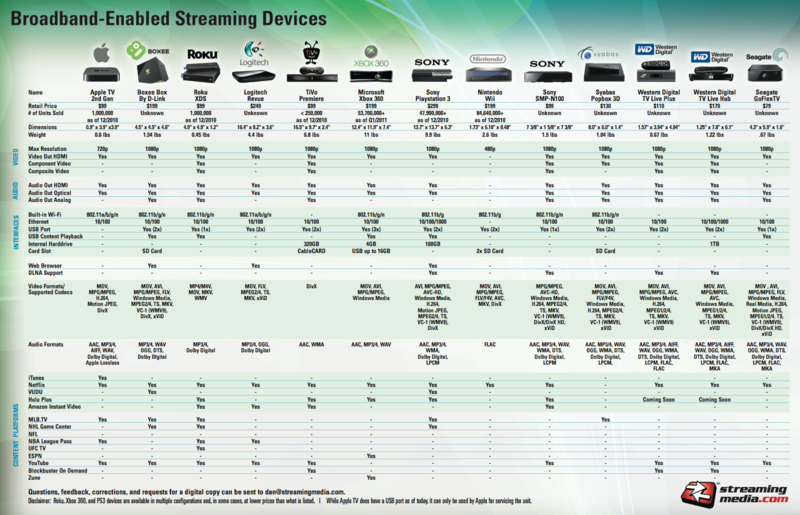