Q4 CDN Pricing Detailed, Down 20% In 2010, Expected To Remain Stable Next Year

Two weeks ago, at the Streaming Media West show in LA, I presented the latest video CDN pricing data from Q4 and also gave out numbers on the size and growth of the video market along with the expected rate of pricing decline for 2011. Video of my presentation will be up by the end of the month, but in the mean time, here are my year-end thoughts on CDN pricing as well as my predictions on what the industry could see next year. (note: you can always find my latest pricing post at www.cdnpricing.com – Previous Quarters: Q1 10, Q2 10, Q4 09, Q1 09, Q4 08, Q3 08, Q2 08, Q1 08.)

For the average customer delivering video via a third party CDN they saw their pricing decline by 20-25% in 2010. Compared to 2009, when pricing fell on average of about 45%, 2010 was a good year for the CDNs. The rate of decline for pricing was much more stable and traffic volume on average grew about 50% in 2010, compared to about 35% in 2009. This would explain why as a whole, CDNs including Akamai and Limelight reported growth to their CDN business this year. Even though the growth was small, 2010 was a much better year for the CDNs than last year when vendors reported their CDN business to be flat or down for all four quarters.

For all of this year, CDN pricing was very stable. In fact, I didn’t even release pricing in Q3 as really, there was nothing to report on. So for the pricing you see below, this is comparing CDN pricing from Q2 to Q4. As you can see, there was not much drop in pricing except at the lower volume tiers. Starting next year, the buckets of volume that I report on are going to change quite a bit as many CDN contracts are now in the petabyte size, not gigabytes. For the lower tiers of traffic like 100GB a month, those deals sizes are considered so small now that pricing is all over the map. The largest CDNs won’t even take on a customer of that size anymore unless they expect them to really grow their traffic over time. 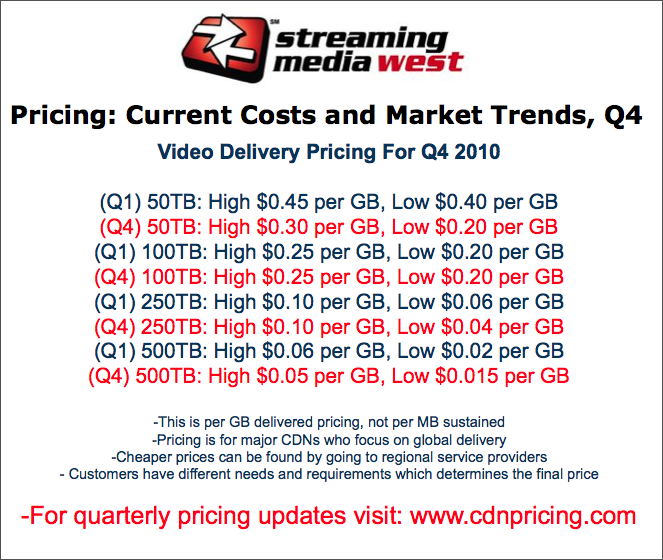 The pricing listed is based on yearly commit contracts, but the commitment rate could be on a monthly, quarterly or yearly basis. It could also be contracts that have a commit based on revenue and this pricing is for video delivery only and does not reflect the wide range other CDN services offered i.e. site acceleration, DNS/SSL etc.

While some have suggested that a new pricing battle may emerge and want to use the recent Netflix contract with Level 3 as an example, I see no data in the market to support this. As popular as Netflix, Apple and Microsoft are, the contracts those customers have with CDNs should not be used as an example of what’s taking place on a wider scale in the market. Why some keep using those customers as an example or want to point to them as evidence of a trend makes no sense, since those contracts are so unique. A trend in the market is based on data that comes from a lot of customers that make up the vast market share, based on revenue, not one or two customers who simply have a lot of traffic.

In January of 2010 I predicted that pricing for the year would be down 20%-25% on average and that seems to the be the case. My prediction comes from all of the data I see, the surveys we do and all the customers I speak with. Based on the data I have collected, the customers I have spoken to and the CDNs who talk to me about their costs, I am expecting CDN pricing for video to remain very stable and only be down 15%-20% on average for next year.

I’m sure that prediction may shock some readers, but if we look at all of the signs in the market, there is nothing I see that shows the CDNs are ready to begin slashing prices. It is also important to keep in mind that even if someone like Level 3 offers lower pricing than a competitor, they own the network and their costs are different. It’s not accurate to report that one company is slashing prices when internal costs from one vendor to another can vary quite a bit and can be the difference in pricing.

Keep in mind, operating a CDN is about the economics of scale. The more traffic a CDN can get on their network in as short a period of time as possible, the quicker their internal cost per bit goes down. The quicker it goes down, the quicker they can reduce pricing in the market to try and get more traffic. This is the never-ending cycle for any vendor in the CDN business. Increase scale, add more bits, reduce internal costs and drive more volume.

I am always asked what’s the catalyst for growth in the market and while many expect there to be one driver, their isn’t. I don’t see anything happening in 2011 that will make traffic growth on the CDNs explode. No one item like HD video, mobile, broadband devices etc. have enough of an impact by itself to cause a huge growth in the market. But taken all together, these items are the real catalyst for growth, and I expect we will see that surge in traffic on the CDNs in 2012. Devices are cool, but neither the Roku, Apple TV, Boxee, Logitech Revue (Google TV) or TiVo have even sold a million devices in the market as of yet. Adoption rates will continue to grow for these devices, but not at the rate some may think or suggest.

For next year, I expect video pricing to decline only 15%-20% on average because for many CDNs, pricing has already come close to hitting rock bottom. CDNs can’t afford to give this away and while some think this is about the “low cost leader”, it isn’t. CDNs have to make money and they know they can’t become profitable based purely on CDN services. That’s why all of them are working very hard to diversify their revenue to come from more services outside of just CDN. When we see that happen in the market, for any service, we know pricing is at a point of where it can’t get too much lower, without a substantial new volume of traffic.

In addition, as more CDNs offer what they call value add services, more contracts are going to be written in the New Year for a wider range of services that have higher margins. That means CDNs won’t have to list out pricing for just one product like CDN, but rather can bundle in multiple products for one price. This enables the CDNs to make more on CDN services than they have in the past without having to be so focused on the lowest price possible, for only one kind of delivery. The price for video will be bundled and basically hidden with contracts that encompass multiple services and bundled pricing is going to have a very positive impact on the market, enabling it to move away from the idea that the CDN business is all about price. It is laughable that some are suggesting that Netflix is using Level 3 to get a low price and giving up performance for cheaper delivery. Netflix and other customers care about price and performance all as part of one unified service.

In 2008, video delivery made up 39% of CDNs total revenue, as a collective industry globally, and in 2010, that number only increased to 42.8%, even though traffic volumes grew quite a bit. The size of the video delivery market for CDNs was $400M globally in 2008 and increased to just under $600M in 2010 which is about a 13% CAGR. (Compound Annual Growth Rate) I’ll have more on these numbers shortly when I outline some of the latest findings of the video CDN market sizing report that Frost & Sullivan will release in December.

For now, it is too early for me to predict what the average traffic growth for video will be next year. While I had the chance to talk to a lot of content owners two weeks ago in LA, most of them said it was too early for them to have any guidance. I’ll be doing a CDN survey in the New Year and will share those data points once I collect them, but for now, I do expect traffic growth to accelerate in 2011.

If you’re looking to learn more about the CDN market or industry, here are some useful URLs that will take you directly to some specific posts I have on the topic and I will also be hosting the third annual Content Delivery Summit in NYC on May 9th, 2011. (www.cdnlist.com, www.cdnpricing.com, www.cdnmarket.com, www.cdnpatents.com, www.contentdeliveryblog.com)

In the coming weeks I’ll have more posts about the size and growth of the video CDN market, details on what transit costs look like for CDNs and a post discussing how owning the network could give some vendors a leg up in the long run. And next year, I will start giving pricing examples of what some of the value add services cost from the CDNs and how those services are sold. If you’re looking to learn more about some of the value add services CDNs offer, check out this post I did on dynamic site acceleration.

Whenever I publish pricing numbers I tend to get a lot of specific questions afterwards, which I am happy to try and answer. So if you have a specific question on pricing, trends or any of the data I have presented, simply put your question in the comments section and I’ll respond. You can also call me anytime at the number listed on my blog.