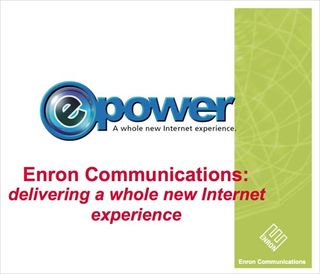 In 1999, well before the downfall of Enron, the company was attempting to build out an IP based network for content delivery. While the service never materialized, I will give Enron credit for using the term "application delivery platform" well before anyone else was even thinking about video based applications. Of course, even though they used that term it didn't help make them successful and the company never achieved their goal of being able to support 100M desktops, let alone get the service off the ground. For those who remember Enron's pitch, the PDF will bring back some memories or just how out of touch with reality Enron really was. You'll also see from the presentation that in 1999, "high bit rate rich streaming multimedia" was considered a video encoded for 400Kbps. Today, that bitrate would be nearly 10x what it was in 1999.