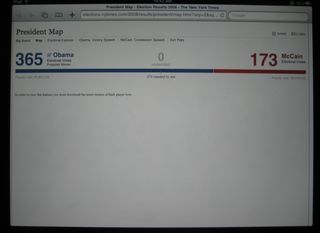 A few days before Apple’s iPad went on sale, Apple launched a new section on their website showcasing a list of websites that they call “ipad ready”. Clearly, part of their reason for doing so was to combat a lot of the people, including myself, who think the lack of Flash support on the iPad makes for a bad user-experience on the device. What Apple didn’t say is that many of these sites, including the New York Times, Reuters, Time and MLB, aren’t truly iPad ready.

After spending a lot hours over the past few days on the iPad, many of the websites I have visited on Apple’s list of “iPad ready” websites, simply don’t work. While videos on the home page work or featured content works, many times when you go a layer down, you can’t get the content. For instance, on the New York Times site, all it takes is clicking on a few links to get blank pages that tell you, “In order to view this feature, you must download the latest version of flash player here“. What? According to Apple, I thought the New York Times site was “iPad ready”. No, Apple wants you to believe it is, but when a lot of the content I am trying to view on the New York Times tells me to download Flash, that’s not my idea of “iPad ready”. It’s simply Apple’s being fast and loose with their words, thinking we won’t notice. “Some” content on these sites works on the iPad, but to imply the “site” is iPad ready is a flat out lie.

On Reuters and Time, while a lot of the content is viewable on the iPad, some of it isn’t. It’s also interesting to note on the Apple site, in reference to the Reuters site it says that “most of” their content is viewable. Define “most of”. On all of the news sites they use a lot of Flash graphics, not just videos, for all of the interactive elements like showcasing election results or applications that have a lot of photos. None of those work on the iPad amongst all of the news sites I visited. And even on Apple’s own site, they use the word “video” when talking about these “iPad ready” sites, not the word content. Flash is used for all kinds of content, not just videos.

While MLB.com is listed by Apple as one of the sites that works on the iPad, it doesn’t. When visiting MLB.com or any of the team pages, in every video window you get a message that says “click here to learn how to get video highlights on the iPad“. That link then takes you to an MLB page that links to the MLB iPad app that you can download for $14.99. While there is nothing wrong with a content owner creating an app specifically for the iPad, no where does Apple say that on their website. In fact, Apple lists the MLB.com URL on their website, which is completely deceptive.

Maybe MLB and others plan to change this over time and it is possible that “iPad ready” sites, as defined by Apple, plan to make more content available down the road. But for all the folks who are quick to comment about how all these main-stream websites have agreed to support HTML5 and think Flash is doomed, you better pick up and iPad and use it for a few days before you make any comments. You can’t argue with a message that says “please download Flash to see this content“. Anyone who buys something from Amazon and can’t get a product video, is looking to adopt a pet and can’t see content on Petfinder or is trying to watch a video on NFL.com is going to be very disappointed.

Apple is shooting itself in the foot by not supporting Flash on the iPad because as much as they want to try and argue or convince us that the “experience” is better without Flash, anyone who actually uses an iPad will tell you it isn’t. Apple needs to quit with the hype, stop trying to make an Apple business decision into an Adobe technical problem and should focus on giving iPad users a REAL browsing experience and not Apple’s own defined limitation of what they think a browsing experience is.

Updated: As someone rightly points out in the comment section below, on Apple’s page that lists the “iPad ready” websites there is a disclaimer that says, “The above websites vary in their level of compliance with open web standards and in some instances may require a plug-in to view content.” The ironic part of that is that the iPad does not support plugins.

Note: Whenever I write about Apple, I get a lot of comments from folks who own Apple stock, think the company can do no wrong or leave me comments about how Flash won’t survive because they had a problem with their Acrobat reader, which isn’t even relevant to the conversation. You want to debate the points I raise above, lets do it. But don’t expect a reply from me if all you want to say in the comments section is “I don’t like Flash”.