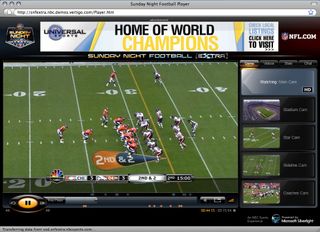 Tonight at 8pm ET, NBC will once again kick off the start of the NFL season by streaming 17 games this year on NBCSports.com and the NFL.com website. The service which will be powered by Silverlight and Microsoft's Smooth Streaming technology will offer a total of five different camera feeds, 720p HD quality, picture-in-picture functionality and the ability to pause the video and watch it in slow motion.

The player includes tabs for the ability to chat and ask questions to announcers, get details on stats, see video on demand clips and will enable users to scroll back to highlights in the game that are noted by a small symbol above the scroll bar. The player gives uses the ability to see real-time details on the quality of the video being delivered by showing the current bitrate being streamed as well as the maximum bitrate the video is encoded for and has the ability to go full-screen. Akamai is the exclusive delivery provider for these games and I expect we'll see NBC put out some details on viewer numbers once the season gets under way. NBC has a pretty good track history of giving out details on consumption from their online video offerings so I expect we'll hear more about it.

While NBC has a dedicated sales team that is selling ads for the games along with other online properties and has said they will do well with their ad sales, they aren't yet willing to project what this might bring in revenue wise other than to say "seven figures". Whether or not that pays for the service itself is not known, but with 17 games over the course of the year, one would have to imagine NBC is making money from streaming. But since Microsoft and NBC are both sharing in the revenue and not knowing if they have to give the NFL or anyone else a cut of the ad sales, it will be interesting to see what details they are willing to give out during the season.