Recent Analyst Research On The CDN Market Needs To Be Questioned

While I love seeing research about the CDN market, I continue to see research reports about the space that have numbers and statements that make absolutely no sense. Anyone who has read my blog long enough knows that I question all numbers, market data and market sizing. While some might want to think I'm picking on folks when I do this, I'm not. It's nothing personal. I simply believe that people in our industry should be asking harder questions and trying to get to the bottom of what the real size of the market is, instead of just quoting something from a press release without actually thinking about it.

That said, I'm not immune to the scrutiny either. As a Principal Analyst with Frost & Sullivan, I expect people to question the data I present and encourage people to ask questions about any numbers I put out in the market. I believe we all still have a lot to learn about the CDN market, myself included, as well as many other facets of this industry.

No doubt, the CDN market is hot, but I also get the sense that many folks think they have to put out a report on the CDN market just because many others have. I can't remember another time in the industry when so many CDN reports came out in the market so close to one another, all of which cost thousands of dollars each. The two most recent CDN reports that have content I have to disagree with come from In-Stat and Yankee Group.

What I don't understand is how any report can be published with so many names of the vendors in the market spelled wrong or formatted wrong. I know it seems like I am nitpicking, and I've written about this on my blog before but it's important. If you are telling someone to spend three thousand dollars on a report, how can you expect them to think of your company as an expect on the topic when the vendors names are spelled wrong? In the In-Stat report and even the press release, the names of RealNetworks, CDNetworks, Highwinds and Alcatel-Lucent are all formatted wrong.

RealNetworks and CDNetworks are all one word, not two. Highwinds does not have the word "CDN" in the name of their company. If the report is attempting to use the product names from Highwinds network offering, it would be "RollingThunder", not CDN. And Alcatel-Lucent should have a hyphen in their name. Those issues aside, just the press release alone about the In-Stat report doesn't make a lot of sense to me. While I don't have a problem with the projected growth of the market, I question what market they are referencing? Reading the report, I don't see them define what "content delivery network services" are? The press release talks only to video delivery, but the vendors mentioned in the release include non video related companies. So what type of content is included in the $2B by 2011 prediction? Why can't any report define what they classify as CDN, what content it includes and what vertical market it is addressing? The term "CDN" is very generic. Are they talking about video? Small objects? Application delivery? Software downloads? Ecommerce? Or all of the above?

But what really baffles me is the quote from the In-Stat press release about the report. In-Stat says, "In-Stat believes that Data Centers and CDNs will become the dominant approach for sourcing ‘everything on demand". Huh? How else would you deliver the content? All CDNs use data centers and content owners who deliver content themselves do it from servers in data centers. That's the way it has always worked. So what does that quote mean? What does the data center market have to do with a report about the CDN market?

On the In-Stat website that has the table of contents for the report, it says "Content Providers have been working on an Internet learning curve for the past decade. They can’t permit an entity, such as Apple, to be the control point for their content." How can they say "can't permit" Apple to do that when in fact the content owners are permitting Apple to do it successfully . Apple owns the eyeballs, the software platform and the playback device. In-Stat says that in order for content owners to have "increased control, lower cost of operation, and widen their revenue possibilities" that "The key solutions run in Data Centers, and connect using Content Delivery Networks." Again, what does data centers have to do with this? Aside from companies like Google, Apple, Microsoft and maybe literally a handful of others, no major content owners is building their own CDN or using data centers to deliver video. And what does "connect" mean?

Moving on to a report from the Yankee Group last week where they ranked the CDNs in the market, I have to disagree with their rankings and the methods they used to come up with them. In a webinar last week, the Yankee Group released a scorecard that ranks providers not on revenue, number of customers, or reach of the network but rather 13 terms such as "openness", "convergence" and "network centricity" amongst others terms. While I don't know what any of those terms means, the Yankee Group gave each term a weighted score to come up with the overall score of each CDN. While they do a link to a PDF on their website that claims to detail their "methodology", it doesn't even list the terms used or define what they mean.

But if you look at the chart below, it makes no sense. EdgeCast gets a 85.0 for "ecosystem" even though they don't have any applications or content management. But Akamai only gets a 50.0 for "ecosystem" even though Akamai has had their own Stream OS product for content management for over two years. AT&T gets a ranking of 40.0 for "capacity", but what is defined as capacity is not disclosed. Based on the public numbers AT&T released on the capacity of their network, they have less than 10% of what Limelight has. Yet Limelight's capacity ranking number is only double what AT&T's is. Amazingly, the Yankee Group gives AT&T a ranking of 42.0 under the term of "management" but Level 3 only gets a ranking of 28.0 for management. You have to be kidding me. Level 3's management has made two CDN acquisitions, rolled out an entire new product, with a real ecosystem offering, closed major customer like Netflix, Comcast and Microsoft and did $50M last year in CDN revenue. What has AT&T done? Where is their customer list or their revenue numbers? They aren't even in the same ballpark as Level 3 when it comes to a CDN offering. 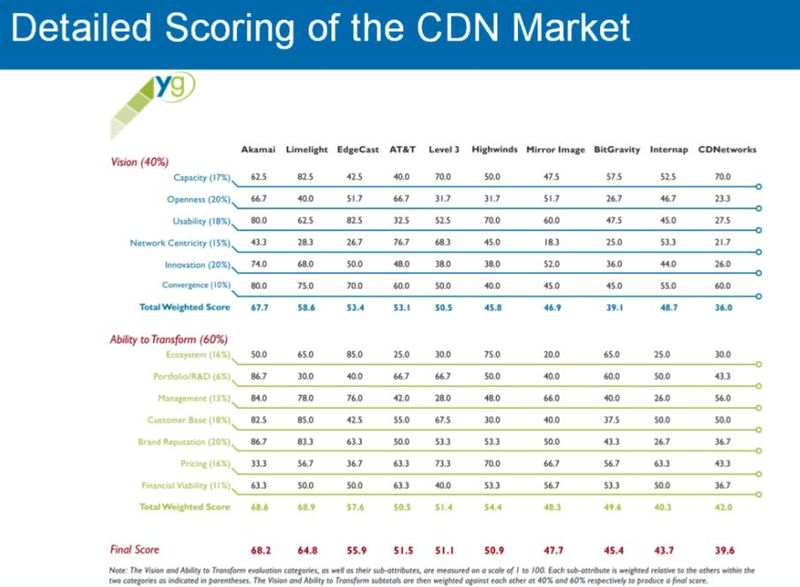 Based on the Yankee Group's ranking, Internap has a better CDN offering than CDNetworks, which is ranked last. I thought that must be a typo, but it's not. With all the problems Internap has had over the past two years with the VitalStream acquisition, how can anyone possibly rank them above CDNetworks? While CDNetworks has been slow to enter the U.S. market, they haven't made any major missteps with their CDN business to warrant being listed as the lowest ranking CDN in the industry today. 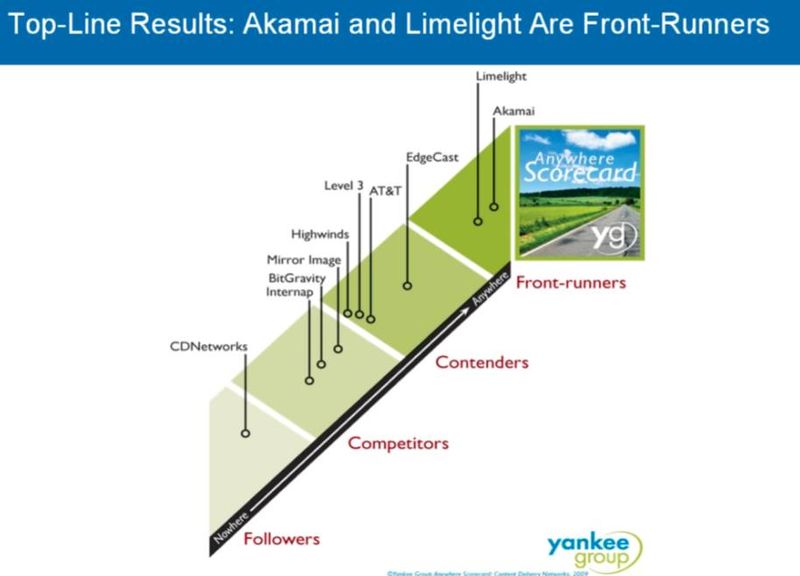 Again, I'm not picking on anyone personally involved in these reports which is the whole reason why I didn't use any analysts names in this post. My intention here is to make sure the industry agrees on a way to measure CDNs and agrees on what it being compared one to another. But when any firm ranks vendors in any industry and says company A is better than company B, but then provides no details on what those terms mean, what the criteria was or how they are judged, it needs to be questioned.

I welcome both companies to provide any additional details in the comments section so we can have a meaningful discussion about the topic.

Updated 8:21: David Vorhaus from the Yankee Group contacted me and we had a long chat about the report. David's comments were, "After reading your points, I think the crux of the issue is that the parameters of scoring are overly vague, and you haven't seen enough information to properly clarify them. Completely agree on both points. To the vagueness issue, the categories have to be given vague names like openness, capacity, ecosystem, etc. The reason is that the structure of the Scorecard is made to be a
pplicable across very different markets outside of CDN."

"The second issue is having enough explanation available to overcome the vagaries. Again, completely understand where you're coming from here. If someone were to only see the information made available on the webinar and what is publicly available on the website (including that generic "Scorecard Methodology" document), I would absolutely expect there to be confusion and areas of disagreement. The majority of the information is held back and only available for clients of Yankee Group, which is the target audience. So there are two full reports worth of information that clients see (both the Scorecard report and a companion report on the market) that provide further detail."