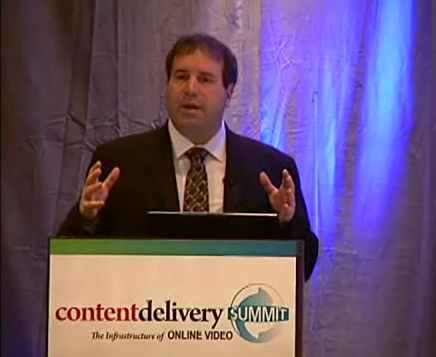 During his keynote at the Content Delivery Summit last month, Jeff Cohen, GM of Microsoft's Edge Computing Network gave out a lot of interesting data as it pertains to Microsoft's CDN business. While the theme of his presentation covered a lot of great topics, one of the points that really stood out was how quickly Microsoft is moving away from relying on third party CDNs for delivery and instead, using their own internal CDN. While this trend by Microsoft is something that has been widely known about to anyone who closely follows the CDN space, this is the first time I have seen Microsoft break out numbers that shows the split in traffic. (Note: Jeff's slides can be downloaded here, video of his presentation can be seen here) 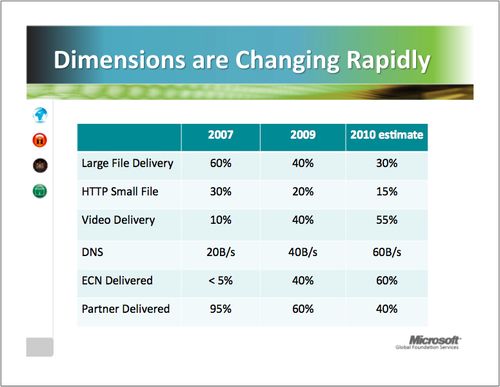 While Jeff said that Microsoft would always have the need for CDNs to compliment their own delivery, clearly that's a lot of lost business for the CDNs in a three-year period. During that time, Akamai and Limelight have gotten the vast majority of Microsoft's business and Level 3 has received a good portion as well, but primarily just over the past 14 months. While Microsoft is not pulling the business away from CDNs overnight, it is a lot of lost traffic for them to have to make up, not to mention, revenue growth they can't rely on. Of the three CDNs that have most of the business, it probably impacts Akamai more than anyone else since Akamai always had the largest share of Microsoft's business. And with Microsoft having licensed Limelight's technology, Limelight should be making up some of that lost traffic over time with their licensing contract.

Jeff's slide also shows some interesting numbers when it comes to the type of traffic being passed over their network. In 2007, video delivery account for 10% of the traffic and in 2010, is expected to account for 55% of all traffic delivered on Microsoft's CDN. At the same conference, Level 3 also stated that video now takes up 70% of all traffic on their network. These data points are more evidence on just how quickly video traffic is growing and the challenge third party CDNs have in trying to make money. When the largest percentage of traffic on your network comes from video, yet video only account for lets say 25% of your revenue, those are some skewed numbers.

While Jeff made it clear that Microsoft will always need to rely on third party CDNs for scale and for delivery in regions of the world where Microsoft does not have a footprint, he also said that, "we want to make sure that what's strategic to our business, stays within our business". Jeff also said that the decision to move traffic to a CDN or from a CDN is done on a "property to property basis" inside Microsoft.

While I don't know what percentage of revenue Microsoft accounts for at any of the CDNs, a question I am often asked, with Jeff estimating that Microsoft's traffic is growing "between 30-100% year over year", that's a lot of additional bits the CDNs won't get to deliver in the future.