I’ve been taking a look at some of the preliminary data that we have been collecting from our CDN survey and we’ve already got some great data points. While I expect a few thousand respondents over the course of a month, after a few days we already have over five hundred customers who have filled it out.

As Akamai’s Q4 earnings from last night showed, much of the "pricing war" talk in the industry by analysts is overblown. Yes, there is some competition, especially when it comes to the largest customers, but for the most part, the "price war" is not as bad as analysts make it out to be and this data point below seems to reinforce that idea.

One of the questions in the survey is: How would you assess the pricing of your current CDN contract(s) versus your last CDN contract? 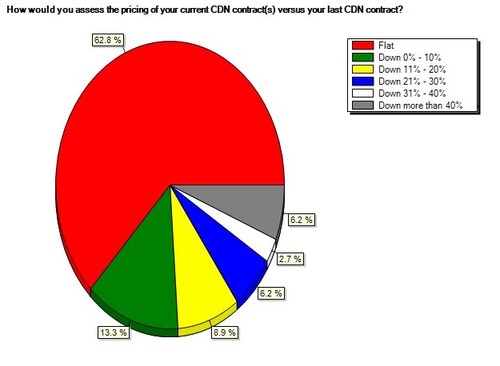 62% of those who have been surveyed stated their pricing was flat year over year. That point by itself is not enough as you really need to know what kind of volume those who fill out the survey are doing, but we’re collecting that data as well and nearly half of those surveyed are doing over 50TB of transfer a month, so it’s good sized customers.

The point is that not every customer is getting rock-bottom pricing and not every customer knows what price they should be asking for. If they did, we’d be seeing lower prices in the market more than we are, but in many cases, customers who already think they are getting a good price aren’t trying to get the CDNs to lower pricing even more, unless the customer is willing to commit to more traffic, more revenue, or more services.