Thursday at 2pm ET I’ll be moderating another StreamingMedia.com webinar, on the topic of, “Making Transparent Caching a Reality“. Telcos, mobile and cable operators face increasing costs of bandwidth delivery needed to meet the demand for online video and a quality viewing experience, while being forced to invest heavily into maintaining their network infrastructure. As a result, a growing number of operators are turning to transparent caching solutions to reduce the adverse impact of OTT video traffic in their environment.

Several vendors have developed various technologies to address the video traffic challenges. But, as analysts, have observed, some solutions are more adept than others. Join us for an informative and entertaining webinar in which our speakers will discuss the video caching issues that matter, as well as looking at some of the solutions available in the marketplace. Along the way you’ll also learn about what makes Qwilt’s own Universal Video Delivery technology tick.

During this 60-minute webinar you will learn:

Register here and bring your questions for the presenters for the live Q&A portion of the event.

This morning Akamai announced they have reached an agreement to acquire privately held Verivue Networks, which providers a transparent caching and licensed CDN platform to service providers. Akamai expects the deal to close by the end of this year and said they will pay all cash for the company, but has not disclosed any other terms of the deal. Verivue doesn’t have a lot of paying customers and has a small number of customer deployments with 2012 revenue in the $20M-$25M range, so I don’t expect Akamai to be paying much for the company.

While many are calling this a licensed CDN acquisition by Akamai, it’s also a transparent caching play. Verivue has two technologies that will benefit Akamai, a licensed CDN platform, and transparent caching technology, which is where Verivue gets a lot of their revenue from. Over the past year, many vendors have been working to combine the two technologies into one platform for service providers. PeerApp, the leader in the market has teamed up with EdgeCast, Juniper teamed up with Tata and Cisco is also working with PeerApp. For a better understanding of how transparent caching fits into the CDN market, read my previous post entitled “An Overview Of Transparent Caching and Its Role In The CDN Market“.

For those not familiar with the term “transparent caching” the idea is simple. Transparent caching platforms make intelligent decisions about which content can and should be cached inside a carrier’s network. By deploying intelligent caches strategically throughout their networks, operators can cache and deliver popular content close to subscribers and reduce the amount of transit traffic across their networks. CDNs like Akamai are good at what they do, serving content to subscribers quickly, and in the process alleviating peering costs for service providers. But there’s an enormous amount of traffic that CDNs do not serve, and that’s where the value of intelligent caching comes in.

Deployed throughout a carrier network, transparent caching improves subscribers’ experience and reduces carriers’ peering costs, but only if it delivers the features and intelligence required to adapt to constantly changing user behavior and content patterns, and most importantly, scales economically to tens or hundreds of gigabits per second. Akamai’s plan is to take the best of both technologies, licensed CDN and transparent caching and combine them into one platform, sold to service providers.

Since Akamai’s announcement of their licensed CDN product nine months ago, the company has yet to mention a single customer by name that is using their platform. This morning they mentioned to me that they have “three customers in trial” for their licensed CDN platform, which is still in beta but that they have “some paying customers today” for their managed CDN product. While we don’t yet know how much money Akamai is paying for Verivue, clearly they aren’t making too big of a bet on the licensed CDN business, otherwise they would have acquired EdgeCast, the leader in the licensed CDN market. But with expected revenues of around $70M this year for EdgeCast, coming from both regular CDN services and their licensed CDN platform, realistically, Akamai would have had to spend a few hundred million for EdgeCast, something I doubt they are paying anything near for Verivue.

As a stand alone business, the transparent caching market is expected to be $142M this year and the licensed CDN market is even smaller. So there is not a lot of revenue here – yet. Also, the market is crowded with transparent caching vendors including PeerApp, Qwilt, Juniper, Huawei, Fortinet, Conversant, BTI Systems, Brocade, Blue Coat, VidScale and Allot Communications who just acquired Oversi. Add to that all of the licensed and manged CDN vendors in the market like EdgeCast, Limelight Networks, Jet-Stream, Cisco, Alcatel-Lucent, XDN and others and it’s a very crowded market. But many of the players in the space are small, some are having trouble growing revenue and it’s only a matter of time before the market consolidates even more. No one truly knows what the size of the licensed CDN market is today, or what it can grow to because it’s only just getting started and we need to see a lot more customer deployments before we have enough data in the market to see how service providers use these platforms. But there is a real opportunity with the right kind of licensed CDN platform and it’s a market that is going to grow nicely over time. Acquiring Verivue should allow Akama to help get deployments in the market much faster.

Close to 100 ISPs are served by the DiViCloud network and 100% of the international downstream traffic to the served ISPs passes through these PoPs and as traffic passes through the PoPs, the software in the PoPs collects traffic statistics. These statistics serve as the raw data for the their report named “Global Data Flow Report“. Based on the data, global CDNs play a primary role in traffic flowing into ISP networks, comprising around 40% of the overall traffic volume. 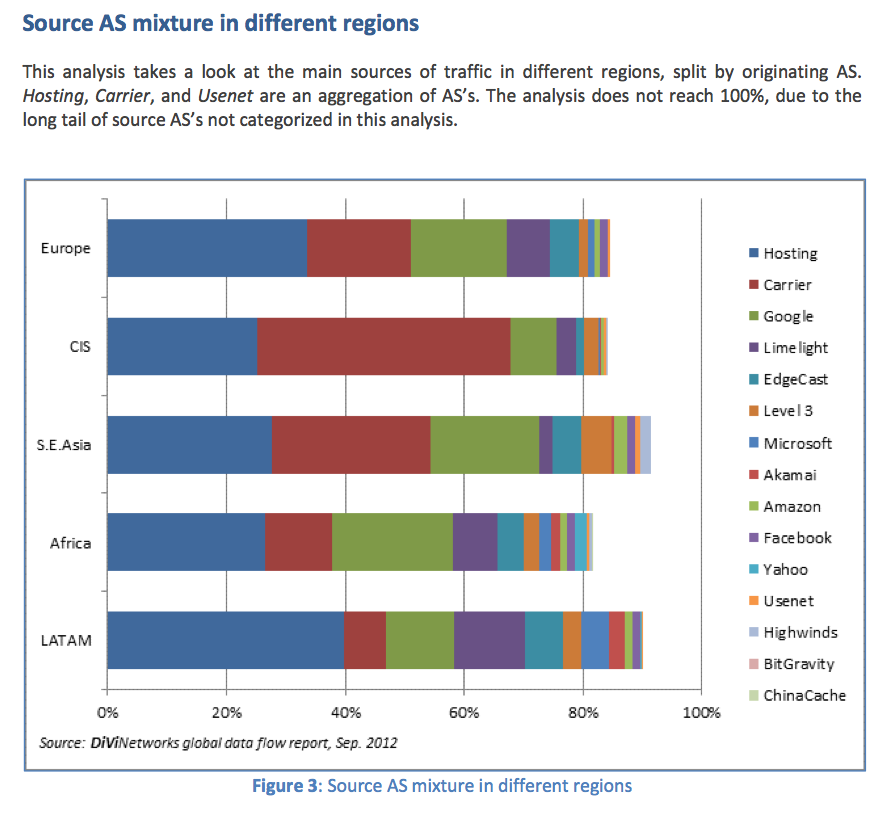 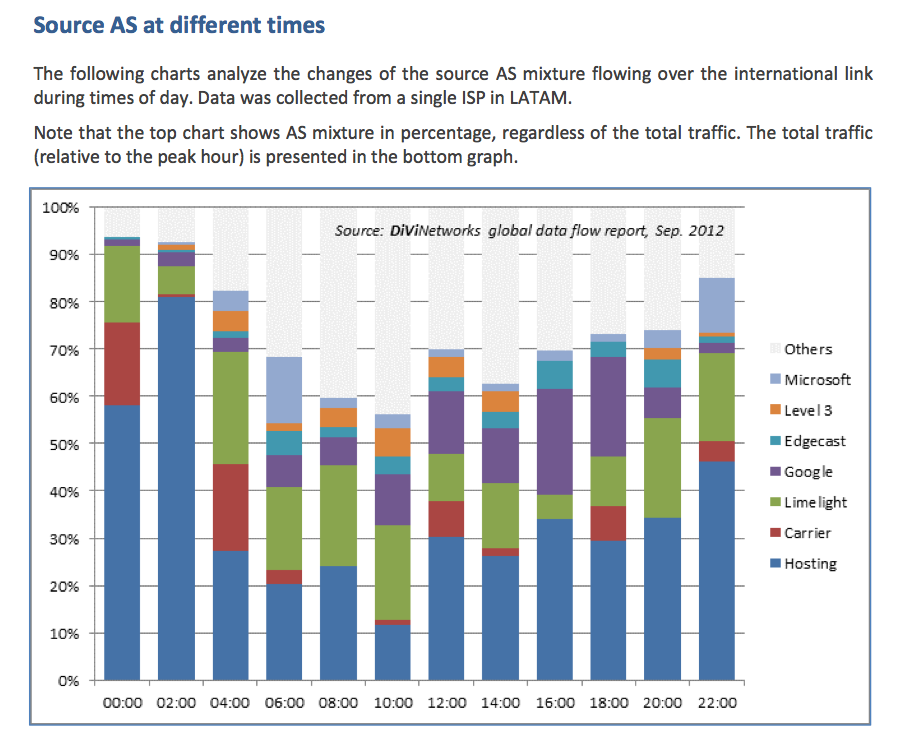 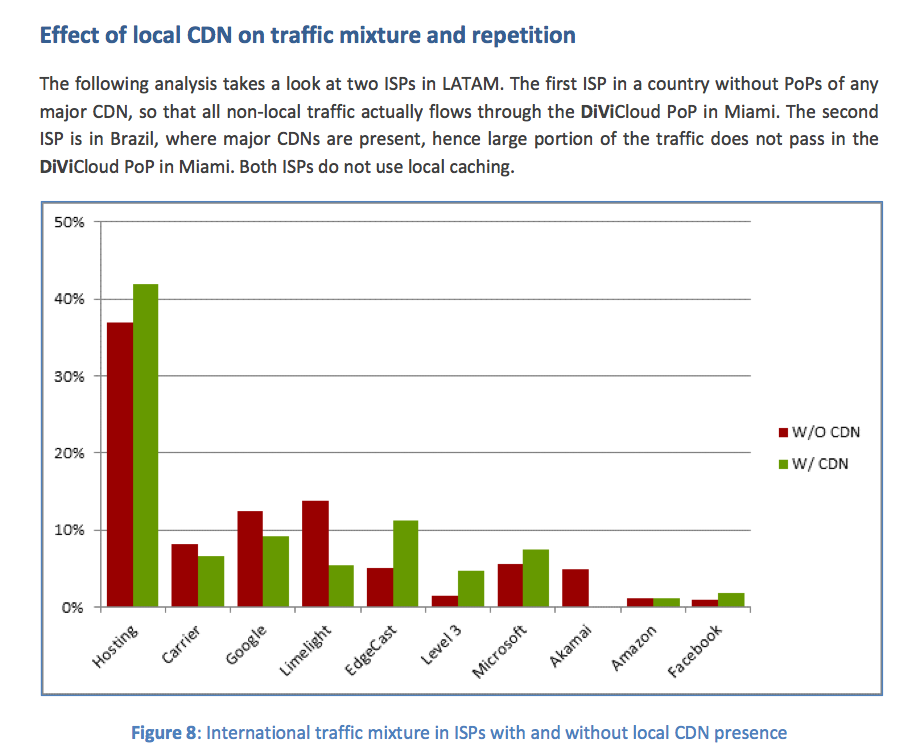 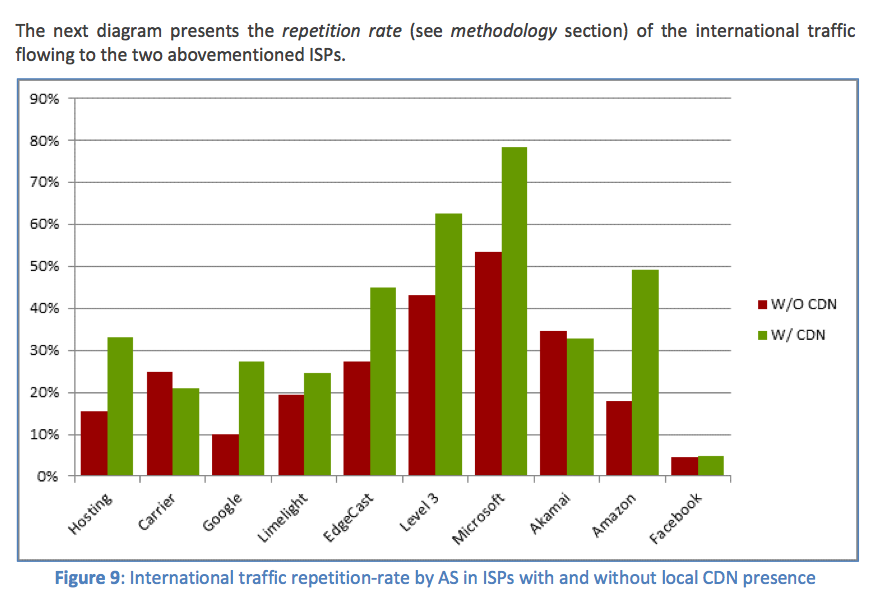 Over the past few weeks, I’d been hearing a lot of rumors that Juniper was planning to exit the CDN business. As you may recall, Juniper entered the content delivery game in early 2010 when it acquired Ankeena and the technology became Juniper’s Media Flow portfolio. In a call with the company last week, Juniper said they are not exiting the business, but are changing their focus and are dropping BitGravity’s CDN technology that they licensed earlier in the year.

While Juniper gets lumped into those who offer CDN services, like other vendors, Juniper develops and delivers gear that customers use to deliver content more efficiently. In the case of Juniper, its Media Flow delivery products could be used within a CDN, within a managed video delivery network, or it could be used for transparent caching, depending on which customer we’re talking about.

Juniper made it clear to me that its Media Flow products aren’t going anywhere. It will still deliver the fundamental caching and content delivery products that are the core of its Media Flow portfolio, for customers to use as transparent caches, for multi-screen delivery or even CDNs and will continue to work with its ecosystem partners who are solution providers and offer solutions in this space. But the company will be making some changes with regards to where they focus their efforts on CDN products going forward.

The company said they came to the decision that building a complete CDN solution didn’t make a lot of sense for a company like Juniper, so instead they are focusing their efforts on their strengths: the core Media Flow content delivery and caching engine. This will be the focus for the company and they will continue to invest, develop, enhance and sell the solution. The service management technology acquired from BitGravity, and some other CDN-related technology projects that were underway will no longer be a focus for the company.

What this means for customers is that they can continue to buy Juniper’s Media Flow products just as they were doing today. But if you were holding out for Juniper’s end-to-end CDN solution with service management, you are out of luck—but for everyone else its business as usual.

To me, I don’t see this change in strategy as a negative for Juniper. Very few vendors truly have an end-to-end solution, for any service, and having a focused product strategy is a big key to being successful. Juniper’s approach is to focus on edge services and caching, which are very important pieces needed for what’s taking place with regards to content delivery in the last-mile.

When It Comes To CDN, What Is Value Add Services and What Isn’t?

The term “value add services” is used a lot by content delivery networks to describe services that don’t fall under the typical commodity CDN business. It’s hard to define exactly what those services are as most CDN vendors don’t define it down to a product level. I get many questions asking what services are classified as value add, but the answer all depends on who you ask. The way I define it for people is that CDN services typically include four kinds of content delivery. Those are – audio/video streaming, audio/video downloads, software downloads and small object delivery.

Services outside of those would be considered value add and would include things like, application acceleration, dynamic site acceleration, front-end optimization, mobile content acceleration, media management (transcoding, ad insertion, content protection) and a host of other services for the purpose of security and commerce. That said, many of those value add services also utilize the CDN’s network to deliver this content, so not everything that falls under CDN can be that easily quantified as value add versus non-value add.

Each CDN vendor looks at and defines their services differently and many confuse the industry even more when they break out their revenue under the generic term of “value add services”, but then don’t define what those services are. Akamai in particular confuses the market because they break out part of their revenue based on services (products), while the other half is broken out by media and entertainment, which is not a product or service, but rather a vertical. All of this aside, here are what I consider to be the most common services that would fall under the term “value add services”, the way I define it, and definitions on what those services are.

In addition to these listed, you also have a whole host of different services to handle things like DoS attacks (security), custom and managed DNS, custom reporting, tracking and analytics (especially for ad delivery) and lots of pieces in the video ecosystem for managing and adding business rules around the monetization of video. This is how I would classify value add services, but others may define it differently. How you would define it?