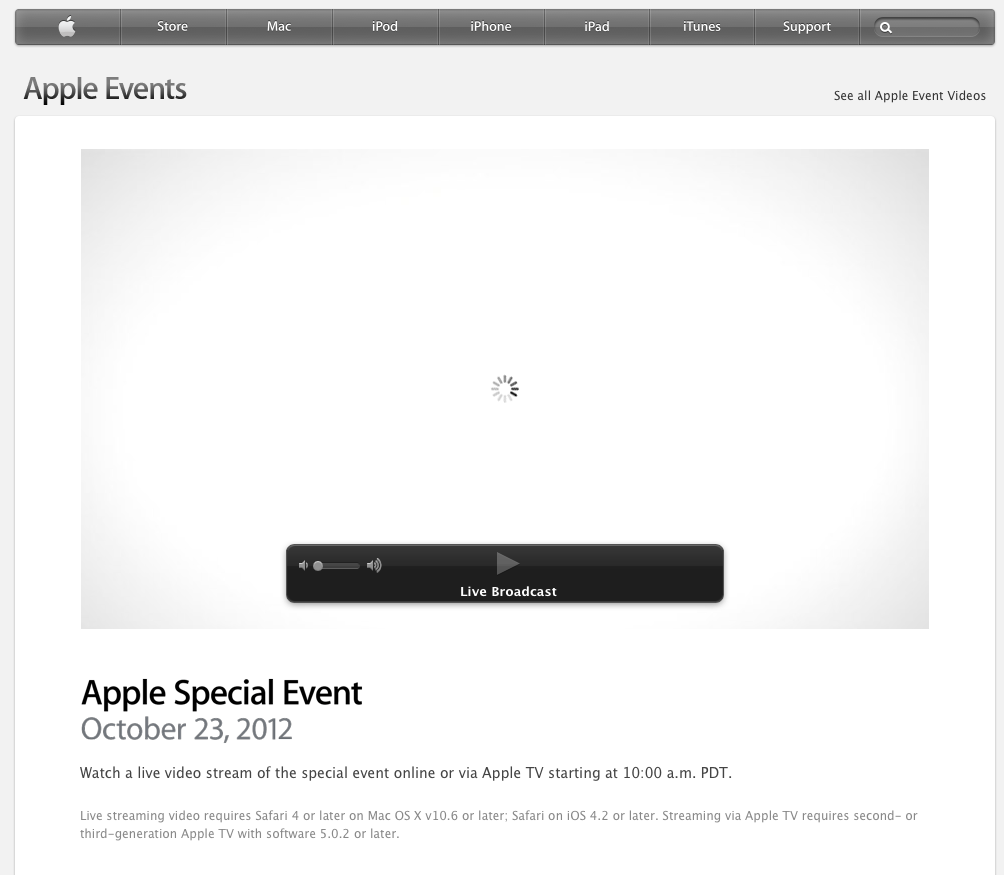 Apple’s live webcast of the launch of their new iPad mini was a failure today after multiple users, including myself, had problems getting the stream to start or staying connected to the stream once it began. I tried the stream in the Safari browser at 1pm ET and got the spinning wheel with the player trying to load, but it took till 1:14pm for the stream to work. Once it did load, it worked for a few minutes before I lost all audio. When the audio came back, the video looked bad with lots of pixelation and twice the video re-wound and went back to a point in the stream it had already played. At 1:26pm, the stream died for me completely and I could not get it back.

Akamai was delivering the live stream for Apple and clearly had problems. While I hear from customers all the time that Akamai’s HLS delivery is often not reliable, I’ve now experienced it for myself. While I only tested it on Safari, other viewers I was live chatting with during the event also experienced problems on the iPhones and Apple TV. Looking at Akamai’s chart at 1:43pm ET that shows the number of real-time connections to their network for live and on-demand videos showed 943,000 concurrent live video streams, for all of their customers combined. And their 24-hour peak was 1.3M. So either Akamai was not counting Apple’s live stream numbers in their chart, or it shows just how few people were able to get the live stream as Apple’s webcast alone should be in the multiple millions of concurrent connections.

As an industry, we’ve been streaming live events since 1996. This technology has been around for 16 years now and there is no excuse whatsoever for a live webcast not to work. Yet this is the same technology that Akamai and others keep talking about that is supposed to rival broadcast TV in terms of quality and reach? I don’t think so.

For content owners that want to get their live event-based streaming content on mobile phones and tablets, many are quickly finding out that getting it to Android devices is extremely challenging. Unlike Apple’s iOS platform, Google has yet to provide an easy way to get live video to Android devices and to date, hasn’t detailed any kind of strategy of how they plan to fix it. Many content owners I have spoken with, as well as those who help these content owners encode and distribute their video are now questioning why they should even continue to go through all the trouble of trying to support Android based devices at all.

While media companies can always build an app for their event series, most do one-off events and are faced with streaming to the mobile web and reaching their audience using browsers on Android and iOS devices. When Android phones became popular, live video was supported in the mobile browser thanks to Flash. Digital video professionals with live content to distribute were able to keep doing what they were doing on the desktop and Flash made it easier than it is now. That’s not to say that Flash was perfect as in many cases their desktop players were heavy, containing ad overlays and metadata interaction that had a major impact on the playback quality. To get better quality video playback, some people turned to RTSP delivery, which Android touted as its native live video format until Android 2.3.4 came out, when that feature no longer worked.

The most effective way to get live video to Android browsers was to make a stripped-down Flash player that didn’t demand much from the phones. Video was decoded in the software but it would drain batteries quickly. It was imperfect but it functioned well enough to play video. With the introduction of Android 3.0 it looked like HLS support was going to be built-in for all future devices, and that has held true, sort of. HLS support doesn’t match the specification, and buffering is common. Industry-leading HLS implementations like those from Cisco and Akamai will not load on Android devices, so for the most part, content owners went back to Flash. But now Flash isn’t available to new Android phones.

Right now, content owners are left in an awkward state if they want to deliver live video to Android browsers. If Flash is present, you can deliver a basic Flash video player. If it is not, you can try to deliver HLS but the HLS manifests must either be hand-coded or created using Android-specific tools. If the HLS video can play without buffering you’ll find that there is no way to specify the aspect ratio, so in portrait mode it looks broken. The aspect ratio problem seems to have been fixed in Android 4.1 but often, if you enter video playback in landscape mode and leave in portrait it will crash. You can allow the HLS video to open and play in a separate application, but you lose the ability to communicate with the page, and exiting the video dumps the user back on their home screen.

In comparison to iOS devices, content owners can still send the same live video to iOS devices that they could in 2009, and it will play smoothly with little buffering. Live video support for browser-based streaming within Android tablets and phones is a significant challenge with little help available from Google, and with Android still talking about removing H.264 video support, many content owners are wondering why they should even try to support Android any longer? What’s clear is that Google doesn’t have a strategy to fix the problem and many content owners and video ecosystem vendors are frustrated. Content owners want to get their live video on as many devices and platforms as possible and right now, getting it to Android devices is very difficult and costly. Unless Google steps in to solve the problem, don’t expect content owners to continue to try to support Android devices for live video streaming.

Content owners that want to give their feedback to Google about this, feel free to do so in the comments section below.

Note: I emailed a representative of the Android team asking if they were willing to talk about this subject but didn’t hear back. If Google would like to respond to this issue, I’ll be happy to post their response or hear any plans they may have to address the problem.

In April, Livestream announced a new hardware encoder called the Livestream Broadcaster. I’ve just received my unit in the mail and have included some unboxing photos below. I’ll be posting a full review of the device shortly, but in the mean time, my initial impressions from being hands-on with it is that it’s really well designed.

One of the first things you notice when you pick it up is how solid it feels, even though it is only 4.8 x 3.0 inches in size and 1.25 inches in height. It’s small, but the broadcaster doesn’t feel cheap at all. It’s also been really well thought out with the top cover held on by magnets so that it’s easy to swap the AA batteries inside. The two buttons on the front that also act as joysticks to navigate the on-screen menu work really, really well.

If this performs as well as it looks and feels, then this $495 encoder will make encoding and distributing live HD events to the web and mobile devices easy and very affordable for many.

If you have specific questions about the device you want to know the answers to, put it in the comments section and I’ll make sure to answer them during the testing process.