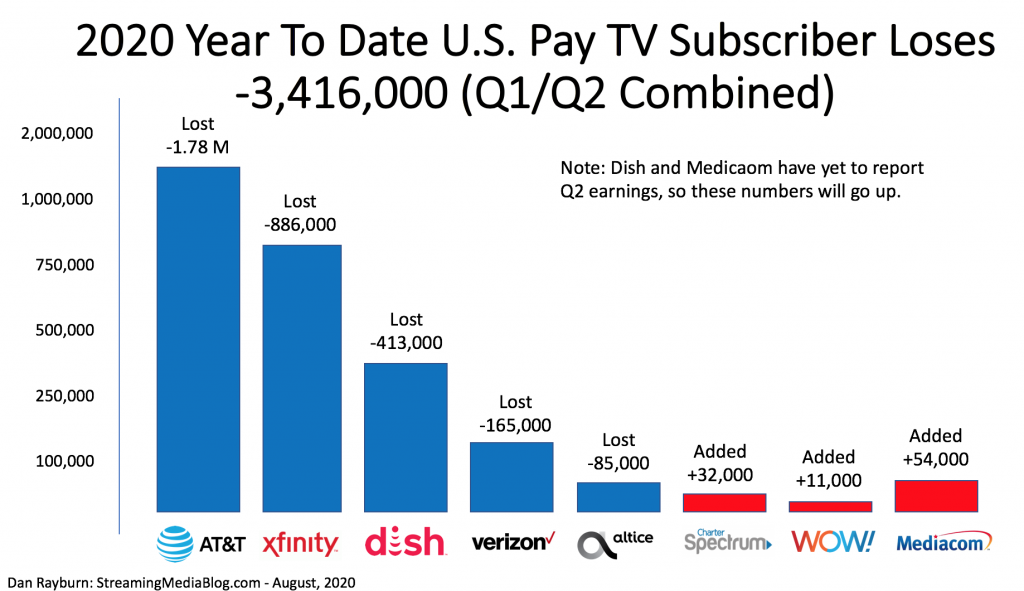 Amongst some of the top pay TV providers, combined to date, they have now lost 3.4M pay TV subscribers in the U.S., since the beginning of the year. And that number is expected to go up as Dish has yet to report Q2 earnings when I expect they will announce additional pay TV losses. Some predicted that when the pandemic hit, the rate of pay TV losses would really jump in Q2 when compared to Q1, especially due to the lack of live sports, but that didn’t happen. The rate of decline quarter-over-quarter remained steady. Here’s a breakdown:

When we see cord cutting taking place in the market most automatically assume that all of these subscribers are simply replacing their cable TV packages with streaming options, but that’s not the case for the majority of them when it comes to live streaming. Of the live streaming services in the market offered by Hulu, YouTube, AT&T, Sling TV, Fubo, ESPN+ and CBS All Access, all combined they probably have’t grown their subscriptions by 3.4M subs since the start of the year. I say probably as Google didn’t disclose YouTube TV subscription numbers on their last earnings call and  AT&T and Sling TV subs declined. We have earnings in the next few days from Disney, ViacomCBS and Fubo, but we don’t know if they will update us with subscriber numbers.

I think Q3 and Q4 of this year are going to be the most important quarters to look at for the pay TV market since we have so much uncertainty around live sports and original content coming back. And if consumers end up staying home more in the second half of the year than previous years, and the NFL or other content isn’t available, it will impact what we see in pay TV losses for the year.

Updated 5:43pm ET: Disney Q3 earnings are out and in the past 9 months, Hulu only added 200,000 subs to it’s Live TV offering. More details on Disney’s earnings here.