Akamai’s CDN Has No Performance Advantage For Video, And Here’s The Data To Prove It

When it comes to CDNs talking about the performance of their network, Akamai wins the award for using the most vague, generic and high-level terms, providing little to no definition of what they actually mean. On Akamai’s Q1 earnings call, the company used the term “quality” eleven times to describe their ability to deliver video and said they “differentiate” themselves based on their “level of performance”. The problem is, when you look at real measurement numbers, not marketing terms, Akamai doesn’t perform better than the other CDNs and many times, performs much worse.

On the day of their earnings call, Akamai was ranked 9th in performance, based on throughput, in the U.S., as measured by third-party company Cedexis. Akamai was beaten out by Level 3, EdgeCast (Verizon), Highwinds and others. 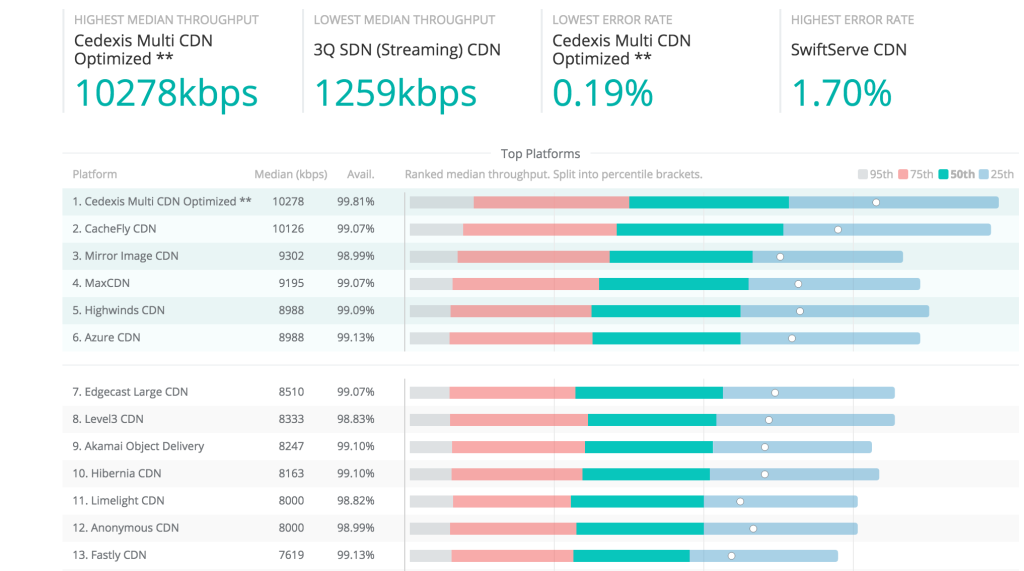 Drilling down into specific regions, in Russia, Akamai’s ranked 4th in latency measurements from key locations around the world, beaten out by other providers. In China, Akamai didn’t even make it into the top 7 at all. This performance data is based on science and not marketing hype or anything else. Just actual performance measurements. 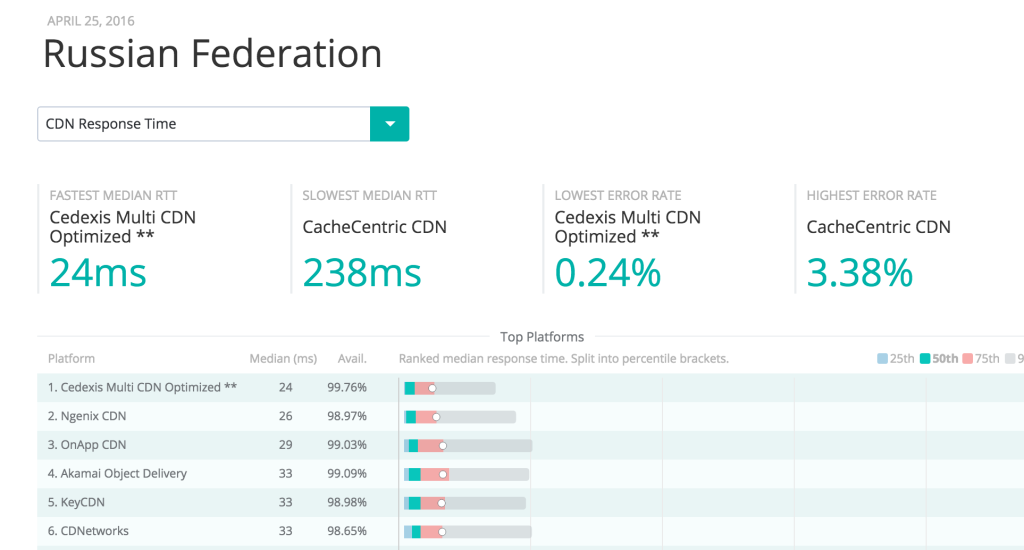 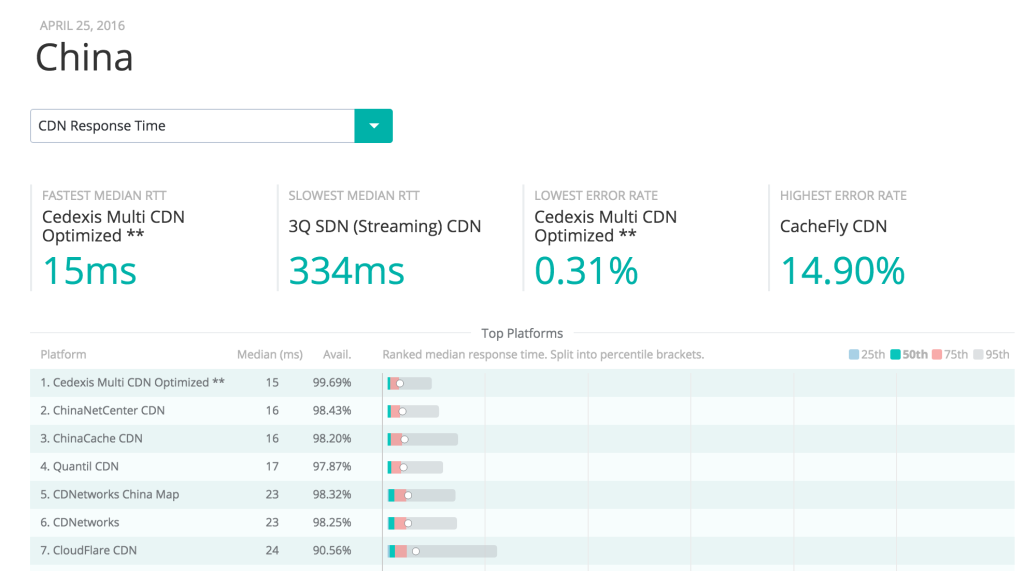 Last year, Akamai was one of half a dozen CDNs Yahoo used for the NFL webcast, and Akamai had performance issues. And yet, Akamai continues to feed the market this garbage about “advanced video delivery capabilities”, “unparalleled quality and scale” and a “high-quality video experience”. And don’t get me started on this nonsense about “edge” delivery. All the major CDN are at the edge too! Akamai is not doing anything different at the “edge”. They say their servers are “located close to end users”. So are their competitors. In fact, Comcast’s CDN servers are even closer than Akamai’s inside Comcast’s network, since Comcast owns the last mile. From a performance standpoint, based on real metrics, no one has better performance than Comcast, on their own network.

Akamai is not doing anything unique with their network footprint, and as we have learned in the market, there are many different ways to deliver content, with good performance. There is not only one right way to do it. How do we know this? Because customers tell us. The whole reason so many customers have a multi-CDN strategy, and split traffic amongst multiple providers is that when it comes to commodity CDN services, all of the major CDNs are usually very close to one another in performance, when looking at real metrics. If one CDN performed that much better, or had some kind of real advantage, customers wouldn’t use multiple CDNs.

If there is one thing even worse that Akamai keeps talking about other than generic phrases about performance, it is the number of servers they have deployed on their network. Akamai’s still pitching that as a value, like it’s the year 2005 when customers bought CDN services based on how many simultaneous streams a network could support or how many servers it has. Today, no customer cares how many servers any CDN provider has. They want good performance and reliability, and how the CDN sets up their network from a topology standpoint, or how many servers they need, is up to the CDN. If I buy 500,000 servers tomorrow, and deploy them in my home, isn’t my network now better than Akamai’s? Of course not. Because the number of servers you have is only one of many things that determines the quality and scale of your network. Transit capacity and locations, public and private peering, interconnects etc. all these things and more determine quality, not just the number of servers.

On the call Akamai said that, “because of our unique approach of streaming content through a global network of more than 200,000 edge servers located close to end users, which allows us to bypass congested middle mile peering points, resulting in a more reliable viewing experience for end users.” There is nothing unique about Akamai’s model at all. All CDNs work to bypass congestion on the Internet, that’s what a CDN is! And if Akamai’s network is so “unique”, why did they have performance failures for major live events for NASA and Yahoo last year and don’t show up first on performance ratings from companies like Cedexis? At times, Akamai will show up at the top of the Cedexis charts, but more often than not, when I check the reports, Akamai isn’t first on the list based on the measurement of throughput and latency.

Akamai also mentioned on the call that they are investing in OTT and the example they gave was that they have opened a new Broadcast Operations Control Center that monitors all the live streams on their network. Welcome to 2016 Akamai. Your competitors have been doing that for years. You’re only just now realizing you need to have a “highly trained technical staff and a host of monitoring, analytics, reporting, quality and availability measurement tools” to monitor the streams on your network. That’s nothing special. Highlighting that you are only doing that now, to the degree you are, isn’t a good thing, it’s shows just how behind your competitors you are, when it comes to aspects of OTT.

Akamai still has no real OTT workflow platform. Amazon acquired Elemental. Limelight acquired Delve. Verizon acquired Uplynk. Level 3 acquired Servecast. Comcast acquired thePlatform. IBM acquired multiple companies. All of Akamai’s competitors have acquired companies to put in place an end-to-end broadcast platform, for VOD and live linear, and Akamai still does not have one. They have pieces, but nothing that’s a true platform.

Akamai needs to spend less time talking about the number of servers they have and trying to convince us they are unique being at the “edge” or that their CDN delivery is “unparalleled”. It’s all marketing fluff and as an industry, we’re not buying into Akamai’s nonsense. Akamai needs to fix their messaging, start talking real numbers, start defining words with real methodology and backup their vague and high-level statements with real data. Otherwise, it’s nothing but hot air.

Filed in Content Delivery | Permalink | Comments (8)
« Hosting Dinner Next Week For Institutional Investors On The CDN Market
Learn How To Use Facebook Live, YouTube Live and Periscope, In An Hour »