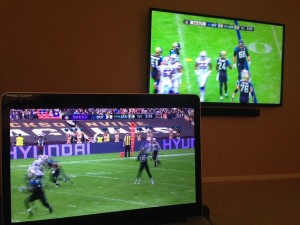 Yahoo’s stream of the NFL game between the Bills and Jaguars kicked off at 9:30am ET this morning and from a quality and technical standpoint, appears to have been very successful. I tested the stream being played back via TiVo, Roku, Xbox, Fire TV, Apple TV, MacBook, iPhone and iPad and experienced very few problems. The stream was split between multiple content delivery networks including Akamai, Limelight, Level 3 and Verizon amongst others. Streams started up fast, within 1-2 seconds at most and I never experienced any buffering or stuttering, aside from the stream to the TiVo. That stream, being delivered by Akamai, had multiple issues with the stream being in fast-forward mode, freezing or having to re-buffer multiple times, for more than half the game. When the stream did work correctly, it looked like cable TV quality on an 80″ TV.

Taking a look on Twitter there were some users complaining of problems with the Internet stream, but not many and while we don’t know how many simultaneous streams Yahoo had, there will always be some users who experience problems when streaming via the Internet. While many want to compare a webcast like today to broadcast TV, you can’t compare the two when the delivery mechanism is so different. Video broadcast via the Internet can’t compare to cable TV distribution, when it comes to reliability and QoS. [See: Streaming Video Can’t Scale At Cable TV Quality, Will Never Replace Traditional TV Distribution] Yahoo hasn’t broken out any of the usage numbers yet, but I would bet that 5% or less of all the streams consumed were via OTT streaming boxes. We also need Yahoo to confirm this, but it looks like the higher bitrate streams on OTT devices were at 60fps.

I don’t know how many details Yahoo will give out in the coming week, but next month at the Streaming Media West show on November 18th, Yahoo will keynote the event and discuss how they selected CDNs according to stream quality and differentiate quality per device. They will also discuss how they collaborated with the ISPs, performance metrics, ABR, and other details of how Yahoo pulled off the live event.