The market for streaming boxes just got a little more crowded with the release of Vizio’s new $99 streaming media device, named the Co-Star. Joining the ranks of Roku, Apple, Western Digital, Sony and Netgear who already have $99 boxes in the market, Vizio’s Co-Star device is being delivered this week, to those who pre-ordered from Vizio.com. I’ve been testing the box for the past two days, and overall, the box performs pretty well. [Updated: See part two of my Vizio Co-Star review, where I answered some of your questions.]

Vizio said they sold out of the original run of boxes made just for the pre-order, but won’t say what quantity that was. The box will soon be up for general availability, but in the mean time, I’m giving one away for free. (See the link at the bottom of this post to enter.) 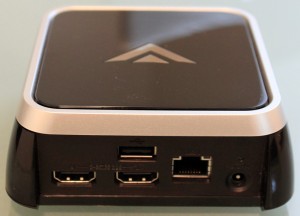 Starting off with the basics, the Co-Star has built-in ethernet, WiFi, two HDMI ports (in and out), DLNA support, one IR port and has USB to support the playback of local content. The Co-Star supports 1080p streaming and is about the size of two Apple TV units stacked on top of one another. The box supports content offerings from Netflix, YouTube, Amazon Instant Video, HBO GO, Wall Street Journal, Pandora, iHeartRadio and Slacker Radio. M-GO video-on-demand is advertised as being available, but hasn’t yet launched. While Vizio originally said the box would support Hulu Plus when they announced the Co-Star, the box does not currently have Hulu Plus support. Vizio says more content services will be added to the box before the end of the year, but aren’t hinting at what those services will be.

While this would be just another $99 box on the market if the specs stopped there, unique to the Co-Star is that it comes bundled with the Google TV platform, which Vizio has completely re-skinned for their device. In addition, no other $99 box on the market has HDMI pass through, thereby allowing you to overlay the Google TV platform and apps on top of live TV, thanks to the Co-Star’s HDMI in port. This is one of the nicest features of the device, as the user experience switching between live TV, Google TV and apps is seamless, but is still hampered by the fact that the Google TV platform still feels like a beta product. 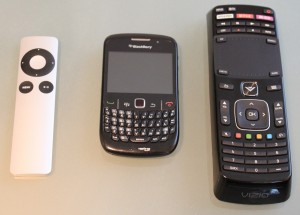 Included with the box is a bluetooth touchpad universal remote with QWERTY keyboard. For comparison purposes, I included a photo of the remote next to a Blackberry and the Apple TV remote. The keyboard works quite well and the touchpad is easy to navigate, but the downside of all this functionality is that the remote is big, heavy and really thick. The buttons are very small, especially the numbers and all buttons require a hard press. There is no chance of you using the remote in low-light conditions since the remote is not backlit, so it really requires you to have to look at it each time you want to use it, especially if you want to change channels via the numeric keypad. While Vizio intends for users to adopt their remote for controlling their Co-Star, DVR, TV and sound system, any real power user isn’t going to use their remote for all their devices. Unlike many streaming media boxes, the Co-Star remote does have a power button to turn the device on/off, but has no LED light in the front of the box indicating on/off status. Clearly you know will know when it is off since it does pass through of your cable signal, but if it has on/off capabilities, I’d personally still like to see some indicator of this on the front of the unit.

Setting up the Co-Star is pretty easy, but it’s no Roku. That said, it’s a bit unfair to compare the two as the Roku has no HDMI in and doesn’t overlay live TV. So naturally, setup with any device that has more functionality, like the Co-Star, is going to take more time. The initial setup isn’t difficult, but will take 15-20 minutes to pair the bluetooth remote, connect the box to the Internet, enter your Google account info, select your TV model, select your DVR or STB model, select your cable provider and do a software update. I’ve already been pushed one software update and Vizio says another one is coming out this week. For anyone like me who got one of the first boxes during pre-order, your setup will be a bit more complex, as there were some issues that the update fixed. But any boxes going forward will have the latest software and will be easier to set up. While I did have some issues during setup, I chalk that up to getting one of the first boxes made and Vizio already knew about the problems and released the software patch. The patch coming out later this week will fix the problems with the 5.1 surround sound, so it’s great to see how responsive Vizio is being to fixing software issues.

I tested the Co-Star hooked up to a TiVo Series 3 unit with cable cards as well as a regular set-top-box from Verizon and saw quite a difference in performance between the two. The Co-Star had some major issues with the TiVo as many of the TiVo commands aren’t on the Co-Star remote and changing channels really lagged. If you have a TiVo, the Co-Star is probably not the box for you. On a regular set-top-box, the Co-Star performed much faster, didn’t have the lag and was pretty responsive, outside of the Netflix app. Most apps on the Co-Star load within a few seconds, but Netflix takes nearly 20 seconds to load.

I didn’t test playback of local content via a USB drive, but Vizio says the box supports H.264 (MP4, MKV, MOV, AVCHD, 3GP, TS), MPEG-4 part 2 (MP4, DIVX, AVI, 3GP, TS), WMV9 (ASF, AVI), MPEG-2 (MPG, TS), H.263 (MP4, 3GP, FLV). I’ll have to put USB playback to the test when I have time, but based purely on format/codec support, this box gives the Western Digital WD TV Live box some competition, for those users who have a local library of digital content they want to play through the device.

While the Co-Star has a lot of features, it’s really hard to call it the box to beat, or declare any box the winner, as consumers have different needs. The Co-Star won’t work with any TV that doesn’t have HDMI, so it won’t be a fit for everyone. No other $99 box has Google TV built-in though, so the Co-Star wins in that category, as well as the HDMI pass through. There really isn’t much to complain about on the hardware front with the Co-Star, but it still lacks support for Hulu Plus, EPIX, Vudu, MLB.TV, NHL and NBA. So Vizio still has some work to do to catch up to the content choices available on the Roku.

Overall, Vizio’s Co-Star device will please most consumers and Vizio’s made a really nice device, considering this is their first entry into the $99 streaming box market. If they can add content services from Hulu and MLB in particular, along with a few others, then this box will have more functionality than a Roku, at the same price.

Updated: I did not have the time to test the OnLive gaming service on the box, so I don’t know how well that performs.

I have two Vizio Co-Star boxes, so I’m giving one away on my blog. Click here to enter the drawing.