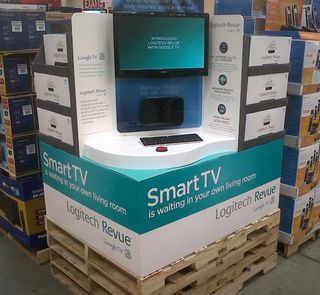 I'm a big fan of Costco stores and over the past few months they have added more broadband enabled devices to their shelves, aside from just their large selection of TVs. On a recent trip to my local Costco, a new product display for the Logitech Revue powered by Google TV had been setup, allowing shoppers to test out the device. Of all the broadband enabled devices Costco sells, the Logitech Revue is the only one I have seen where consumers can try out the device in the store.

The Costco store was crowded when I went so I hung around the Revue demo area and spent time asking people a lot of questions about the unit when they were using it. Of the few dozen people I spoke with, almost all of them had no idea what the Revue does. Many said it puts the web on your TV, but they didn't know what that really meant, what kind of content it enables or how they go about using it. The Costco person who manages the electronics area didn't know much about the device and could not answer any questions and while a lot of people came by to play with it, not a single person I spoke with bought the device during their visit.

The biggest thing I heard from the consumers I spoke with is that they don't know what the value of the device and the Google TV platform is. Many asked why they would need to put the Internet on their TV when they have a computer for that already. Some asked what kind of programs the device comes with and many commented that they don't understand what exactly it gets them besides a browser on a TV and a keyboard. One person commented that the wording on the packaging of the device says "if you can think it, you can watch it", yet as we all know, to date, every major network has blocked their content from the device. Even today, the landing page for the Revue on Logitech's website says "you can watch what you want, wherever it comes from". Talk about setting wrong expectations with customers.

I don't believe a stand alone product like the Logitech Revue is needed in the market because the only way Google can have success with their platform is to get it embedded into TVs, which we're already starting to see them do. But if Logitech does want to try and sell a lot of Revue units, a store like Costco is not the place to try and push them as potential customers have a lot of questions and need a lot of hand-holding. The success or failure of Logitech's Revue unit really won't have much of an impact on Google as Google TV is long term play for the company, by my estimates five plus years.