Last month, at the Content Delivery Summit, I presented my latest pricing data from Q1 for video delivery services amongst the major content delivery networks and had the chance to meet with dozens of large content owners in the M&E space. (You can see the video of my presentation here.)Overall, pricing remained pretty stable and from everything I have seen so far in Q2, 2010 should be a pretty stable year for pricing when compared to 2009. Now halfway through the year I am willing to bet that the average pricing decline for video delivery will be between 20%-25% for 2010 compared to a average decline of 40%-45% for last year. (note: you can always find my latest pricing post at www.cdnpricing.com – Previous Quarters: Q4 09, Q1 09, Q4 08, Q3 08, Q2 08, Q1 08.)

At the same time, content owners I spoke to have some realistic expectations of growing traffic 40%-50% this year which means for the first time in five to six quarters, the CDN vendors in this space have a real good shot at improving their margins. While we have seen Akamai reducing pricing for video delivery services in the M&E vertical over the past two quarters, most of their re-pricing appears to have been completed. On new deals, Akamai is still being aggressive and coming close to Limelight and Level 3’s pricing or tend to be just a little higher. Without a doubt, they have made their competitors jobs much harder when it comes to competing on price.

While it is impossible to know just how much market share the vendors have and who’s taken the most share from one another, in the first half of this year I have seen Level 3 have more momentum in the market than Limelight. While Level 3 does not do as many press releases and is not as vocal as some of their competitors, I continue to see them growing quietly in the market. Akamai’s been able to retain their market share only due to their re-pricing strategy and while Limelight hasn’t gone anywhere, we have yet to see them really ramp their revenue and take the business to the next level. For Limelight, 2010 is going to be a make or break year for the company and I’ll have more thoughts on that is a separate post shortly. 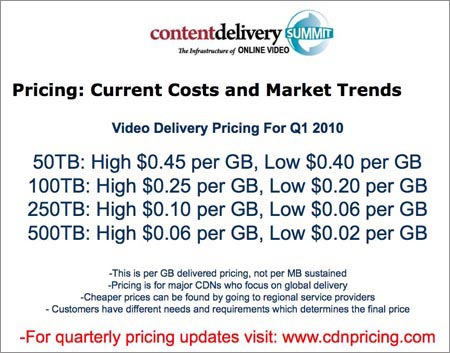 While I know some vendors don’t like it when I always talk about Akamai, Limelight and Level 3, one can’t argue with the fact that these three CDNs account for probably 70% of the entire market, specific to video delivery. Smaller guys like EdgeCast are still going strong, CDNetworks is rolling out new app services and guys like Amazon and others are making good traction in the SMB size of the business. But that fact remains that for all of the CDNs that have raised money and come to the market saying they will challenge the big boys, none of them have yet been able to even put a dent in the big three.

Part of that is simply due to the economics of scale. It’s hard for a smaller CDN to compete with someone like Akamai on volume or with a Level 3 who owns the network. Of course this also makes many ask when the telcos and carriers are going to enter the space with their own CDN offering, but those days are long off. At the Content Delivery Summit, we had over a dozen carriers and telcos who all said the same thing on stage, that being that the market for video delivery service simply is not big enough. They didn’t see the need to have to own the CDN product for another 2+ years. While some want to always disagree with me when I say the carriers won’t be competitors anytime soon, you don’t need to believe me, the carriers were very open and vocal about this on stage at the conference.

So much went on during the Content Delivery Summit that there is now way for me to recap it all but we now have all of the session online and available for viewing at www.streamingmedia.com/videos

I’ve been getting a lot of questions since the summit about traffic growth, pricing trends, value add services, app acceleration, device penetration, dual-vendor sourcing etc. and I still have not had the time to write up all the posts I wanted to. So in the mean time, while I try and get to all of these, please feel free to put any questions you have in the comments section and I’ll try to answer them the same day.

In the second half of this year Frost & Sullivan will be releasing our annual report on the size of the content delivery market for video and I’ll have more data and details to share about that shortly.