Why Is MSNBC Porting Poor Quality Internet Video To The Xbox? 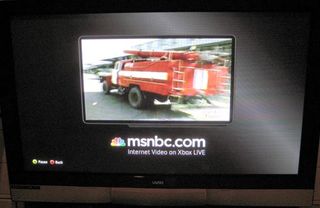 Over the past two weeks, the Xbox LIVE dashboard has been featuring a bunch of MSNBC.com video highlights from the Olympics as well as news headlines. I decided to check some of them out last night and I was really disappointed to see that MSNBC.com is simply taking the low-bitrate stream for the web and using it on the Xbox platform. As a result, the video window is small, gets centered in your TV and most of your screen is filled up with a big border all around the video, as you can see in the photo above.

As we all know, the Xbox 360 is capable of displaying really good quality video, even 1080p. But in this case, MSNBC.com is not taking advantage of the Xbox 360 platform and instead, is using what looks to be around a 500Kbps stream, which is being encoded specifically for the web, not for a device connected to your TV. While I don't think Olympic highlights has to be in 1080p, we are talking about sports content with a lot of motion that looks really bad at 500Kbps. Why wouldn't a news organization as big as MSNBC.com have the content encoded specifically for the device it is being played back on? Is it purely an effort on their part to save money on video distribution costs?

A person I spoke to involved with Xbox agreed that it was not a good example of the Xbox 360's video capabilities and that the Xbox team was aware of it. A spokesperson for MSNBC.com said, “we’re in the process of providing video in full HD and will let consumers know when it’s available.” When I pressed them for a date, I was told, "later this year". While that's nice to know, I can't understand why they wouldn't have the proper video quality to begin with from day one.

Filed in Media & Entertainment, Video Formats/Platforms | Permalink | Comments (2)
« Internet Enabled TVs Are Not A Big Deal For The Video Industry, Here’s Why
Workshops On Streaming And Flash Delivery Taking Place In NYC On March 23rd »