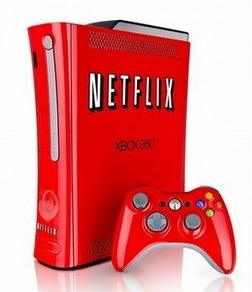 While Netflix is not yet giving out a lot of details on their costs associated with their streaming video service, they have given out enough data for us to have a pretty good idea of their costs when it comes to their streaming delivery costs for the Xbox 360 and other devices. Here's what we do and don't know and how it all breaks down.

We know that the average encoding rate for video streamed to the Xbox 360 is about 2000Kbps. That means one person watching a two hour movie would transfer roughly 1.8GB of data. For high definition movies, the average encoding bitrate is around 3200Kbps and one user would transfer about 3GB of data. Based on the high volume of movies Netflix is doing each month, they are getting a very good rate in the market. I estimate they are paying on average about $0.03 per GB delivered across Limelight and Level 3 and potentially have even a slightly lower rate.

Based on the three cents per GB assumption, that means it would cost Netflix about $0.06 to deliver one SD movie and $0.09 to deliver one HD movie. Those numbers would be about 25% lower if the length of the movie were ninety minutes instead of two hours. It would also be a little lower or higher depending on the exact bitrate since some movies are streamed higher and some lower and Netflix only has about 400 movies available in HD. Taking all that into consideration the average cost to Netflix to stream to the XBOX 360 is about five cents per movie. Streaming to the PC is a lot cheaper, about half that cost, as the bitrates are much lower.

Based on those numbers, their streaming offering looks like it would save them tons of money and make them a lot more profitable since Netflix spends about 78 cents out and back for standard pre-sort first class mailing of their DVDs. But the one problem is that these streaming costs do not yet include the licensing costs from the content owners. It's the costs associated with licensing the content that really makes or breaks their streaming service, not the cost of bandwidth.

I don't know what Netflix is paying to license content and many of their licensing deals are all at different prices. In other online video offerings I have seen content owners charge a one-time flat fee per video, a fee each time the video has been watched, a one time licensing charge for a specific number of plays or many various other licensing models. I've seen licensing costs as high as $4 per movie, per play, and I've seen pricing on the other end of the spectrum at a few pennies per play. That's why many of the content licensing deals Netflix has in place are a one time cost no matter how many movies are watched. While that works great for Netflix today, most of those licensing deals are not with major studios for first-run content. It's also interesting to note that Netflix's recommendation algorithm takes into account which movies have a cheaper licensing cost and makes those movies show up as recommendations more often.

One of the major reasons that Netflix does not have a lot of new content in their streaming offering is the fact that the licensing costs for new content is so high. Studios are still greedy and Netflix simply can't afford to pay the costs associated with first run movies.  Netflix's CEO had said many times that they are going to spend a lot of money this year to license content where the costs are "reasonable". That comment goes to show that much of the newer content is simply out of reach for Netflix, as well as others and that studios simply want too much cash. Over time, you would think the studios would get on board with this and license some newer content faster, but so far, they don't seem to want to. At some point, one of the major studios is going to break from the pack and give it a shot and test the waters, making it affordable for Netflix to offer some newer, first-run content. But right now, the studios think they don't need Netflix.

I would not agree with that, but looking at the penetration rate Netflix has, it is very small. Netflix has ten million subscribers and while they and Microsoft said last month that "1 million Xbox LIVE Gold members have downloaded and activated the groundbreaking Xbox LIVE application from Netflix", they didn't say if those are paying Netflix members. With 48 hours free trail cards showing up in Xbox 360 games, we don't truly know how many paying customers are using the service. And as of January of this year, Microsoft had sold 11.2 million Xbox 360 consoles in North America. (Source: NPD) So if the penetration rate is only one million today, it's going to take years before it truly scales. And that's really what the movie studios care about, a large audience. I think it is short-sided thinking on the studios part, but I don't think anyone would disagree with me if I said it's not the first time the studios didn't get it.

But the question remains, what is the total cost to Netflix to stream a movie? For some content Netflix has today, it's clearly cheaper than mailing out a DVD, but for other content, it's still more expensive based on the licensing costs. And with all the talk lately of Netflix wanting to some day offer a streaming only service, probably this year, running the numbers for such a service does not make a lot of economical sense. Lets say the average cost to stream and license a movie is $0.50. All it takes is one user streaming ten movies a month and Netflix's cost is five bucks. And with their cheapest DVD offering with unlimited streaming being $8.99 a month, how much can Netflix realistically charge for a streaming only service? Maybe $5.99? So far, the economics of a streaming only service don't work unless Netflix can get very good licensing terms and hope that users who don't stream a ton of movies each month make up for the ones that do. At this point it's a guessing game, although Netflix is already compiling some great data on what users are doing with streaming and what their consumption habits are.

For now and some time to come, Netflix's streaming service is not going to generate revenue. Yes, Netflix does expect it to help retain customers and if that is all it does, that alone is worth the cost. With Netflix's churn being 4% last quarter, anything that helps keep churn down from their core business is very valuable and can generate a return. While Netflix said it spent around $40M for their online video offering in 2007 and most folks I spoke to said they thought Netflix spent twice that last year, clearly it appears as if Netflix is ramping up to spend close to $100M in 2009.

The key thing I think people are missing is that Netflix's streaming service is not a substitute for their DVD business; it's a complement to it. Over time, many years from now when broadband enabled TVs and Blu-ray players get some install base, things may change. But for the next few years, Netflix is not going to make money from their streaming service unless the financial benefit comes as a result to their core business.

That said, what Netflix is doing is exciting and I love the streaming service on my Xbox 360. Netflix is laying the ground work for the future and it's going to be really fun to see where they take this service a few years from now. We're all keeping a close eye on the financial impact streaming movies could have on their overall business. Studios, give them a chance! License some decent content already.

Filed in Media & Entertainment | Permalink | Comments (58)
« Video Hardware Vendors Facing Challenging Times, Grass Valley Up For Sale
If Everyone Had Verizon FiOS For Broadband, Capping Would Not Be An Issue »