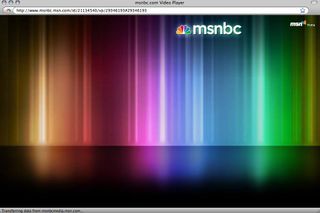 I've blogged about the problems with MSNBC.com's online video offering so many times now that they probably think I'm picking on them. But I'm not. It's just that the experience from their site is so poor, the video encoding quality is not up to par with other sites and frankly, many times I can't even get the video to play.

Last week I had trouble with videos taking more than thirty seconds to buffer. This morning for hours, when I clicked on any on-demand video links on their home page, I got a pop up window with no video player at all. It's just a colored background and the browser is trying to connect to msnbcmedia.msn.com but never resolves. (see screenshot above)

In the past few minutes, it seems they have fixed the player issue, which now loads, but the video doesn't. I'm still getting the "loading video, please wait" message for twenty or thirty seconds before videos play, if they play at all. I had someone check this on the West coast and they saw the same problems as well, not to mention I had it happened to me on two different machines, in Safari and Firefox.

Why does MSNBC.com continue to have so many video problems? Why isn't the video encoded at a higher quality? Why can't someone from MSNBC.com address these issues in a public forum? The last time I contacted MSNBC.com about a problem I had they said there was no issue. Then days later they quietly put out a statement on their website acknowledging that the webcast "was hindered by technical difficulties." So what is the problem today? A player that would not load for hours and videos that take forever to buffer.

I encourage someone from MSNBC.com to contact me or to give an official reply in the comments section on why MSNBC.com's online video offering continues to have so many problems.

– MSNBC.com Video Still Not Supported In Firefox Or Safari For Mac Users