I've just completed my review of all the contracts and RFPs I saw in the market for the fourth quarter of 2008 and overall, pricing from the major content delivery networks for video delivery was pretty stable without much decline in pricing from the third quarter. (note: you can easily find my latest pricing post at www.cdnpricing.com)

Looking at pricing year over year, it looks like CDN pricing for video on a per GB delivered model fell between 30-35% from 2007 to 2008. While many of the contracts from the fourth quarter was for new business in the market and not contract renewals, those with renewing contracts saw on average about a 50% decline in pricing from a year or more ago. While that might make some think pricing fell in half year over year, remember that many of these contracts are 12 and 24 months in length and also included a lot more traffic over a twelve month period. Additionally, we saw many content owners increase their video bitrates from 300Kbps in 2007 to 500-750Kbps in 2008. In many cases this increased the number of bits they pushed by two or three times without any additional growth in traffic year over year.

The other trend from the fourth quarter is that many of the major CDNs are giving volume discounts on lower tiers. In the past, customers had to be doing hundreds of TBs per month to see major discounts, but in the fourth quarter, many CDNs were dropping the volume tier to lower levels. Those doing around 250TB a month are getting better volume pricing.

While many want to say that some CDN vendors are only competing on price or are giving the business away, this is not the case with the major providers. I have seen multiple instances where Limelight and Level 3 have passed on business because the customer wanted pricing that was too low. Yes, pricing is a factor but it is not the only factor for customers when signing contracts. For the quarter, the lowest pricing I saw in the market was still from newcomer BitGravity and the highest pricing was still from Akamai.

While some are speculating that Akamai is now starting to cut pricing for commoditized video delivery, I don't see that being the case across the board. In many cases they are offering lower pricing than before, but their bottom price that I saw was still about 20-25% more than what Limelight, Level 3 and CDNetworks are charging for completely commoditized video delivery business. You can read more on Akamai's recent pricing trends from my post last month entitled "Akamai Getting More Aggressive On CDN Pricing, But More Steps Are Needed."

For 2009, I don't expect to see a big decline in pricing. Even with the lower pricing that we are seeing from folks like Cogent and others, the CDNs all know that they can't give this stuff away. The content delivery business is all about the economics of scale. CDNs have to multiply the volume of traffic on their network many times over before the next round of major pricing discounts can take place. I think it will at least a year in the market before we see that happen. So while pricing always goes down based on customers doing more volume, I don't expect a big drop at all this year.

In my previous pricing posts, I was including pricing averages from roughly 15 different CDNs. I've quickly realized that this causes the average price to fluctuate greatly based on one provider being very high or very low in the market and skews the numbers. The pricing also changes drastically based on the volume of bandwidth that one is committing to, which I have also varied over previous post based on deals I'm seeing in the market.

Starting with this post, I am only going to use the pricing I see from the 4-5 major CDNs in the market to come up with the average price per GB delivered. Moving forward, I'm also going to keep the GB volume the same each quarter so that it is easier and more accurate to compare pricing from one quarter to another. This is not an exact science but keeping the data points consistent from one quarter to another will help everyone be able to better compare pricing over the course of the year.

For content owners, please keep in mind that the below pricing is not necessarily what you should pay. Many factors can and should affect the pricing and the averages I published are for large volume commoditized video delivery contracts. 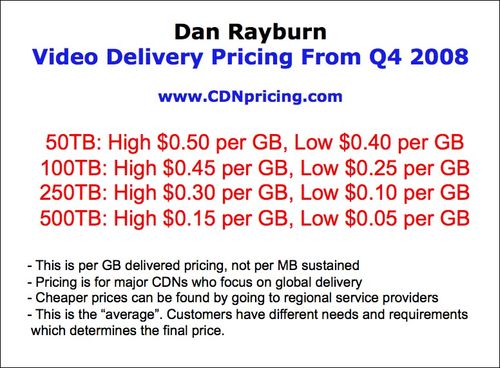 The average contract length I am seeing for video only delivery is
still 12 months. For contracts that include more than just video
delivery, things like small object delivery, static caching etc.
contract lengths average close to 24 months.