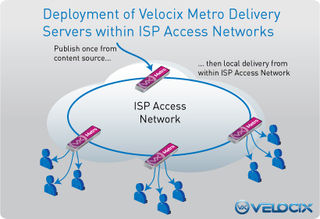 Velocix has launched a new product named Velocix Metro that enables ISPs to deploy servers within their access network, providing them with their own content delivery network for video and other rich media content. (press release)

While Verizon was the first to announce they would deploy Velocix servers to deliver content to their last mile customers with FiOS, this announcement now takes that offering and makes it available as a product to any ISP looking to cut their costs, manage traffic more effectively and generate a new business model.
Besides being a unique offering in the market where a CDN is looking to license their distribution technology to other providers, Velocix also announced that Metro comes pre-bundled with server software from Adobe and Microsoft to support Flash, Windows Media and Silverlight and is working with Sun as the preferred equipment provider.

For Velocix and ISPs, this is a very different approach to the market and one to watch very closely. Most ISPs let CDN providers come into their network and deploy caching boxes to allow the ISP to pass traffic directly to the CDN which helps to reduce their transit costs. This new approach by Velocix lets ISPs build what is essentially their own private CDN enabling them to control costs and potentially add additional revenue if the ISP has good peering and wants to deliver content to users outside of their last end mile. Something Verizon is not doing today but is expected to utilize down the road due to their extensive peering arrangements. In addition to the cost savings, Velocix Metro enabled ISP's receive a revenue share based on traffic delivered via their networks from Velocix.

While this won't put any of the CDNs out of business anytime soon, it is something they have to closely watch. As the press release says, "Traditional CDN providers charge video broadcasters for premium delivery services but ignore the fundamental role that ISPs play in the end-to end delivery process. Rather than including ISPs in the value chain, CDN providers simply pump video traffic into their networks, leaving the ISPs to bear the cost of distribution on to their subscribers". As more video gets delivered at higher bitrates, the burden to ISPs is only going to increase and many will be put in a tight situation trying to manage the costs on their network. We are already starting to see this happen with the major players, but think about how this affects the smaller ISPs to even a larger degree.

For now, the Velocix Metro solution is completely managed by Velocix and over time, Velocix plans to allow the ISP to take full control of the solution and turn the management of the boxes over to the ISP directly. While the fact that Velocix manages the boxes worried me at first, it does make sense for Velocix to get it up and running with the ISP and do the majority of the work before the ISP resumes control.

There are a lot of really interesting things that could come from this solution and the more I think about how Verizon might use it down the road, it leads to some very interesting possibilities that could have a big impact on how video bits are delivered and how some of the current issues that ISPs have with video may be solved.

Look for my follow up post this week on how the Verizon and Velocix deal might evolve into something that's very important for the rest of the industry.

Filed in Content Delivery | Permalink | Comments (14)
« Level 3 To Cut 450 Jobs, CDN Group Still Growing: Should Do $45-50 Million
For Many Akamai and On2 Investors, Emotions Clouding Their Judgement »