Review: Hands-On With Netflix Movies On The Xbox 360, HD Included 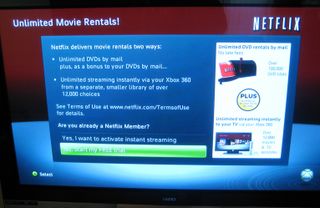 Thanks to the folks at Microsoft and Netflix, I've gotten the new Xbox 360 console upgrade and have started watching Netflix movies on my Xbox this morning. A couple gaming sites have been doing some reviews as well and have raised a bunch of questions, some of which I have already asked Microsoft and Netflix and will update this post if I get answers.

The new Xbox 360 console update, which will be release to the public on November 19th, includes the highly anticipated ability to stream Netflix content to the Xbox 360 console as long as you are a Microsoft Live Gold customer and a Netflix customer.

After downloading the new console update and then downloading a small Netflix update, you active the streaming functionality by entering a code from your Xbox 360 into your Netflix account via the computer. From there, you can add Netflix videos into your watch now queue and they instantly show up on your Xbox 360. Navigating through your movies is done by going to the Netlfix box in the "Video Marketplace" channel which takes you to an app that allows you to very cleanly and very quickly flip through the movies in your queue. The movies are represented by cover artwork of each movie and even when you have a hundred or so titles in the queue, the app is super fast. I would compare the experience to being almost identical to flipping through albums in iTunes using Cover Flow. The only major downside here is that movies still have be added via the computer first, before they can be played back on the Xbox 360.

Once you select a movie, you get a screen with details about the video and the ability to rate the content as well as the ability to start, resume or remove the video. When you select play, the app checks your connection speed and buffers the video. For me, the videos buffered very fast and I never waited more than about ten seconds for any video to start. That may not be the startup time for the average consumer though as I am on a 20MB FiOS connection. While most movies are in SD, Netflix has to date made about 300 videos available in HD, many of which are TV series and not actual movies. Watching the SD movies on a 50" plasma screen looked amazing and HD is really incredible. The quality of the stream is all based on your connection speed and I am waiting on Netflix to hopefully give me details on the encoding bitrates being used. But the bottom line, the video quality is really, really good and in my eyes, is DVD quality with no frame rate issues.

Netflix and Microsoft have clearly thought about the experience, the ease of use and the quality of the videos being delivered and overall, I expect users will be very happy. That being said, this hands on review leaves me with three main questions that will dictate how successful the offering will be.

For starters, what is the business relationship and model behind the new service? With three parties involved, Microsoft, Netflix and content owners, whom is paying whom to make all this happen and how will money be made? I know this is a new service to start and hence, a clear business model has not yet been established. But over time, one will have to emerge.

Second, does the availability of getting movies on the Xbox 360 now mean that more content owners and in particular, major movie studios, will start giving Netflix the rights to encode and deliver more first-run movies? Hopefully so, but they still control the content and have a big say in the success that the Netflix service will have.

And finally, will Microsoft and Netflix come up with a way to organize and search the entire watch now inventory directly from the Xbox 360 console without having to use a computer? From what I can see, that is the only missing functionality of the service that would make the experience better. UPDATE: In regards to adding this functionally Netflix said, "This likely will change in the future – can’t say when".