CDN Pricing In Q3 Drops At Some Levels: Vendors A Bit More Agressive On Pricing

At last week's Streaming Media West show, I presented the latest CDN pricing from the third quarter for pricing specific to video delivery from the major CDNs. Overall pricing remained somewhat stable, but there was a large drop in pricing for some levels of volume compared with pricing earlier in the year. (note: you can easily find my latest pricing post at www.cdnpricing.com)

I saw the biggest drop in pricing at the 250TB a month level with pricing on the low end dropping by 50% over the previous quarter. While 250TB is not a huge customer, a lot of "average" customers are in this range. Pricing once again dropped for customers doing over 1000TB a month, but that is expected since that is such a large amount of traffic and the largest customers always have some pricing flexibility.

Overall, many of the CDNs are getting a bit more aggressive when it comes to pricing but still are NOT giving business away. I still see some of the major CDNs passing on business if the customer wants pricing that is just too low. Also, in the last two weeks, I have seen three RFPs where the major CDNs all bidding on the business were priced within four cents of each other. The exception to the rule was Akamai who was coming in at almost double to what all the other CDNs were charging and it should be noted, did not win any of those three deals.

While many report that Level 3 has the lowest pricing in the market, that is not the case. Limelight is the most aggressive with regards to price and every Level 3 deal I have seen is in line with what most of the other CDNs are charging. I do not see a huge gap between the CDNs in terms of what they are pricing deals at except with Akamai. 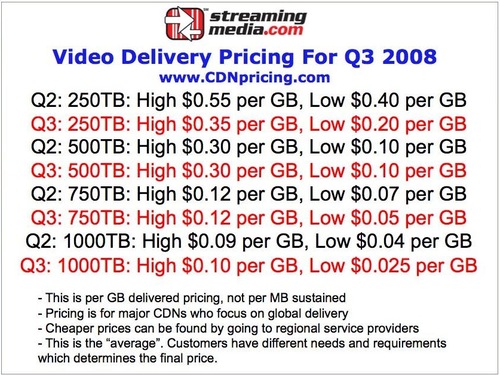 The average contract length I am seeing for video only delivery is still 12 months. For contracts that include more than just video delivery, things like small object delivery, static caching etc. contract lengths average close to 24 months.

For those that think pricing will only continue to drop, think again. Once customers start pushing a lot more traffic, they will be at a level where the CDNs can't discount it much further or they risk losing money. The real question and the thing we have to watch closely is when the CDNs can drop pricing across the board AND still make money. This will only happen when the economics of scale kick in and the CDNs are able to operate their networks cheaper, with vastly increased scalibility than they are doing now. I think realistically, for many of them, that can happen by Q2 of next year.

I will have more thoughts on the CDN market and what I heard from the Streaming Media West show in posts later this week.