Comparing the data for content delivery pricing specific to video delivery in Q2 from the prior quarter shows pricing remained very stable in Q2 but with some new trends emerging. While pricing for Q2 is almost identical to Q1, there was a drop in the price per GB delivered for those customers who on average are doing over 1PB (petabyte) a month. While this is a small percentage of the total number of CDN customers overall, I did see new contract pricing as low as three cents ($0.03) per GB delivered on new 12 month contracts. In Q1, the lowest I saw was around two and a half cents but that was not the norm. (Note: you can easily find my latest pricing data at www.cdnpricing.com)

I think it is also important for me to point out that while many on
Wall Street are implying that the CDNs are seeing slowing traffic or less CDN growth in terms of the numbers of bits pushed, that is not the case. I don't see any market indications from customers or CDNs to lower traffic last quarter or any signs that customers are delivering less content. To the contrary, all I see is more bits pushed, more often, at higher bitrates and to more devices. With Akamai, Internap and Limelight all reporting numbers in the next two weeks, investors should be asking them details on the products that make up the numbers Wall Street cares so much about. Analyze the products the numbers come from.

One of the biggest trends I am seeing in new contracts is no monthly commits required. In its place, customers are committing to traffic over the course of the entire 12 months. While this is not brand new and has been going on for some time, it is now almost the norm for new customers who have a lot of delivery. Anyone doing more than about 500TB a month and in some cases even lower, is committing to a yearly amount of traffic instead of monthly. While this does not have much of an impact on CDNs in terms of revenue, it is good for customers as it gives them more of an incentive to push as much traffic as they can with the CDN. And since you don't pay overages on a per GB delivered model, customers are getting more content online and available for viewing. (related: Content Delivery Pricing: Understanding CDN Overages)

While some customers I talk to as well as analysts in the industry seem to think that before too long CDN services will be almost free, that could not be further from the truth. While pricing has dropped year over year, pricing has remained very stable for the last three quarters and should remain so. There is a direct fixed costs to running and maintaining a content delivery network and the services of a CDN will never be free or close to free. And while some of the smaller, newer CDNs are willing to give away the business to grab market share and are losing money on those deals, well established CDNs will not give it away and lose money. While every CDN I speak to always says they aren't losing money on any deal, I know that is not the case. I see some of the pricing on these contracts that some of the newer CDNs are charging and I know they are losing money on various deals. When they are pricing things at one or two cents per GB delivered, and they don't have the size or scale of a larger CDN to take advantage of buying transit in bulk, money can't be made at those levels. For those that worry this may erode the pricing of more well established CDN players, it won't. Customers are not buying on price alone and many customers I speak to are willing to pay more to be with a well established player who has been proving for years what their network is capable of.

At this time, I don't see pricing on these large deals going much lower when the lowest is at three cents per GB delivered. Many of the CDNs have told me that at that level, they are just breaking even and aren't making anything on those deals, which is ok since so few of their customers are getting that level of pricing. As CDNs continue to scale their networks and learn how to better optimize their servers, which gives them the ability to push more bits with less infrastructure, we could then see a small pricing decline. But I expect that will be 12-18 months off as most of the established CDN vendors don't expect to be able to really advantage of their next major network upgrade, on the software side, until that time. 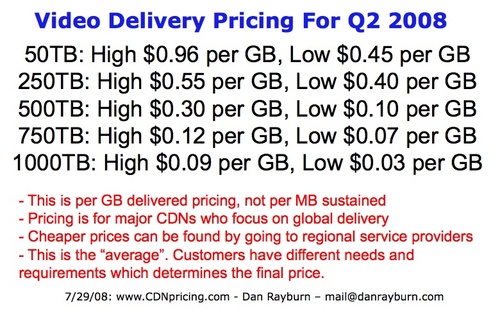 At the Streaming Media West show in September, I will be making two presentations on the CDN market. The first will be reviewing all of the latest pricing data and breaking down the numbers in greater details. This presentation is entitled "CDN Pricing: The Going Rate For Video Delivery".

My second presentation entitled "CDN Research Data: World Content Delivery Networks Market" will be my first report with Frost & Sullivan that will break down the CDN market specific to video. The data presented will also analyze the trends in different regional markets: Americas, EMEA, and Asia Pacific, as well as provide revenue and demand forecasts for CDN solution providers and peer-to-peer based solutions. Register for the show before Aug. 20th for the discount rate.