CDN Pricing Stable In Q1: Drop In Price Only Seen At Highest Levels

(Note: My latest pricing data can always be foiund at www.cdnpricing.com) At the Streaming Media East show on Tuesday, I published my CDN pricing for Q1 in a session entitled "CDN Pricing: The Going Rate For Video Delivery". You can download the slides from the presentation here.

The first thing that some of you may notice when comparing 2008 Q1 pricing with Q4 of lat year is that it looks like pricing went up. However, for Q1, I changed some of the metrics on how I am reporting pricing as well as who those numbers are from. In the past, I started pricing at 1TB of data transfer per month. As you can see from all the comments on my blog in Q3, pricing is all over the map at low levels and my pricing at 1TB was inaccurate for a lot of customers. Today, anything under 50TB is considered small and CDNs don't think of a customer being large until they are doing about 500TB per month. So moving forward, I am going to give out pricing starting at 50TB a month of transfer. Anything under 50TB a month is now really impossible to give out an "average" number for.

Also, pricing for Q1 is now only from CDN players who are focused on going after large companies. In the past, I included data from those who go after large companies as well as those we go after small and medium sized customers. Those who go after small and medium sized customers are what I call regional service providers. There are probably over a 100 of those companies and they all do pricing differently, including packaged pricing where you get certain levels of storage and transfer all for one price. They tend to price very differently than those CDN going after large business.

The only place I saw pricing go down in Q1 is with a very small percentage of the largest customers who continue to push a lot more traffic each month. Those doing over a petabyte. The lowest price I heard for 2PB a month was two and a half cents per GB delivered.

That being said, here are the numbers for Q1. I will post the video archive of my session as soon as it is available. 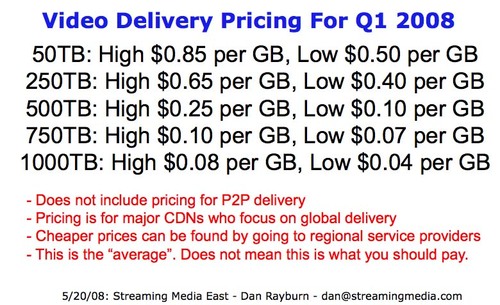